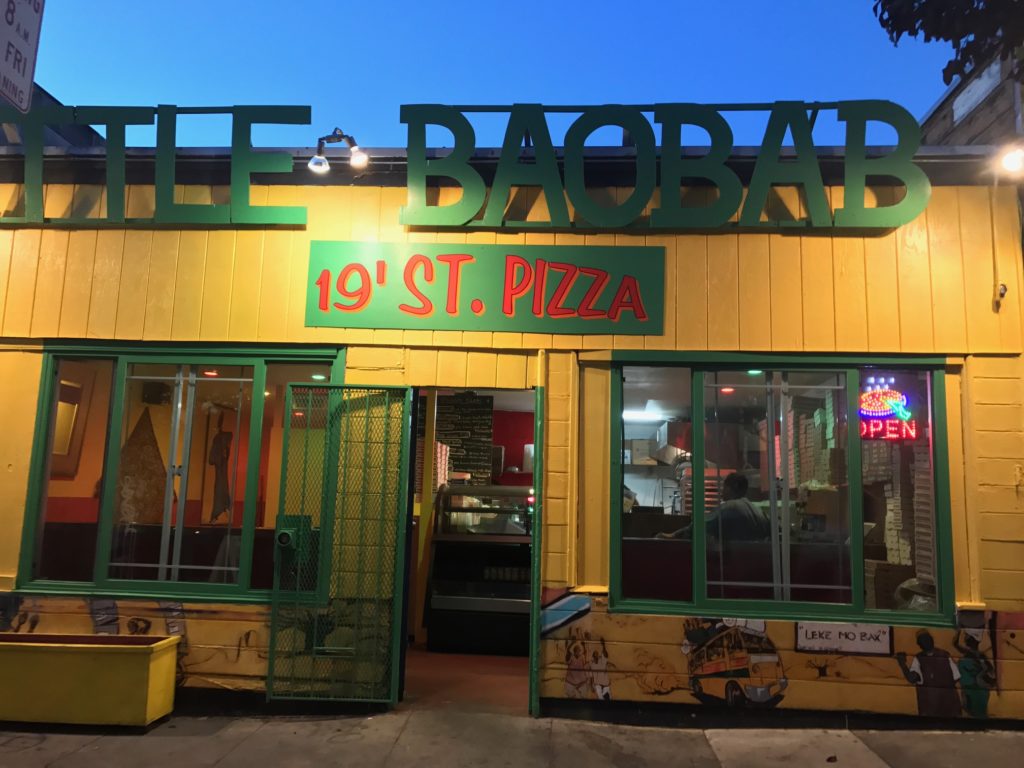 Inspired by the success of Indian pizza in the city, Bissap Baobob owner Marco Senghor has converted his second space in the Mission into a pizza restaurant that offers three Senegal-inspired pies alongside traditional flavors.

Senghor said he struggled to come up with the right formula for the spot since he reopened in 2016 following a fire, but ultimately decided the wraps and crepes he was serving were too similar to what he was offering at Bissap Baobob, its adjacent sister restaurant and dance club.

“It was a big mistake … doing the same thing, having the same concept next door,” Senghor said Sunday, days after the new restaurant’s reopening.

The spot’s old name, Little Baobob, still hangs above the new 19th St. Pizza sign on the front of the building, but Senghor hopes the new menu is enough of a switch to attract a bigger late-night crowd.

19th St. Pizza, between Mission and Capp streets, is currently open from about 5 p.m. to 2 a.m. most days and closed Mondays. Senghor hopes to start offering delivery in the next couple months. Its thin-crust pizza offerings include yassa, inspired by the popular Senegalese dish, barbecue chicken with Senegalese flavors and an African seafood option.

The African pizzas, the first he’s aware of, got a great reception when he tried them out on patrons at Bissap Baobob, Senghor said. The pizza restaurant was already busy on Friday night, and on Saturday night, there was a line out the door.

Ultimately, Senghor said he hopes that the familiarity of pizza will entice people who would not otherwise be adventurous enough to try African food. 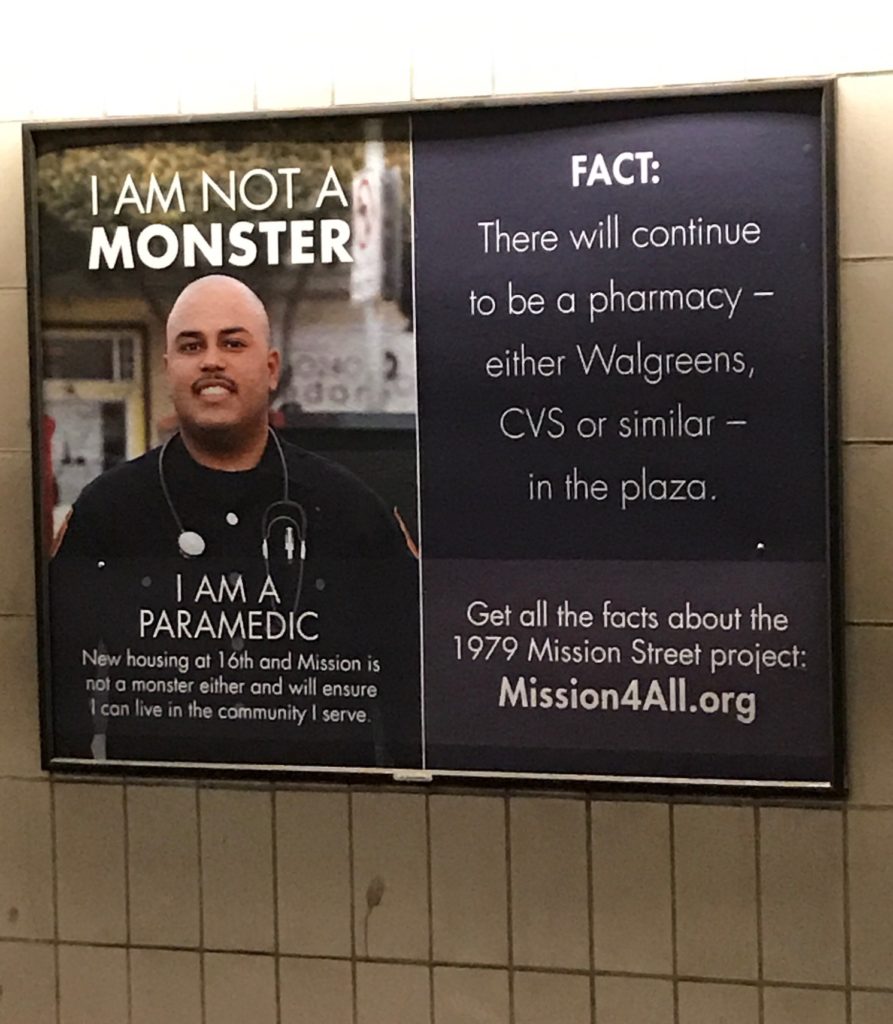 Supporters of a large and controversial housing project proposed for the Mission have shelled out thousands in ad dollars to, quite literally, put up a monster fight.

Mission for All LLC paid $45,600 to display pro-development ads at the 16th and Mission Street BART station from Sept. 4 until the end of the year, according to BART spokesman Jim Allison. The 24 posters line the BART platform and are part of a larger campaign in support of a 331-unit development at 1979 Mission St., dubbed the “Monster in the Mission” by critics. The ads feature a teacher, paramedic and nurse, among others, along with the words “I am not a monster” and the assurance that the housing will allow them to live in the community they serve.

First proposed in 2013, the project has been the subject of intense debate with critics arguing that it is too big, too expensive, does not do enough to address the city’s affordable housing needs and will make gentrification in the Mission even worse. A group opposing the project, Plaza 16 Coalition, is demanding developer Maximus abandon the project and transfer the property into community hands.

According to Arellano, Mission for All is an outreach team of young Mission residents hired by Maximus, who have been canvassing the neighborhood to explain the project to residents and dispel misinformation he claims is being spread by opponents. 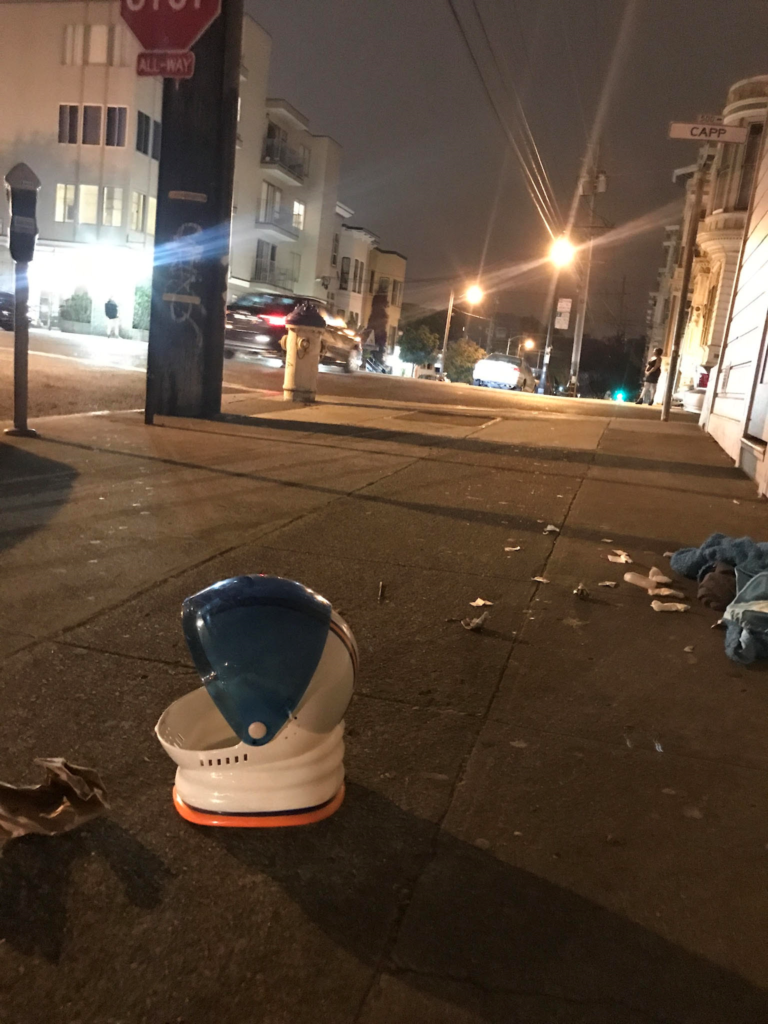 [Spotted on 20th Street between Capp and Mission.  Thanks, Lyla Rose!]

Too ghoul for school. Help support a Halloween tradition 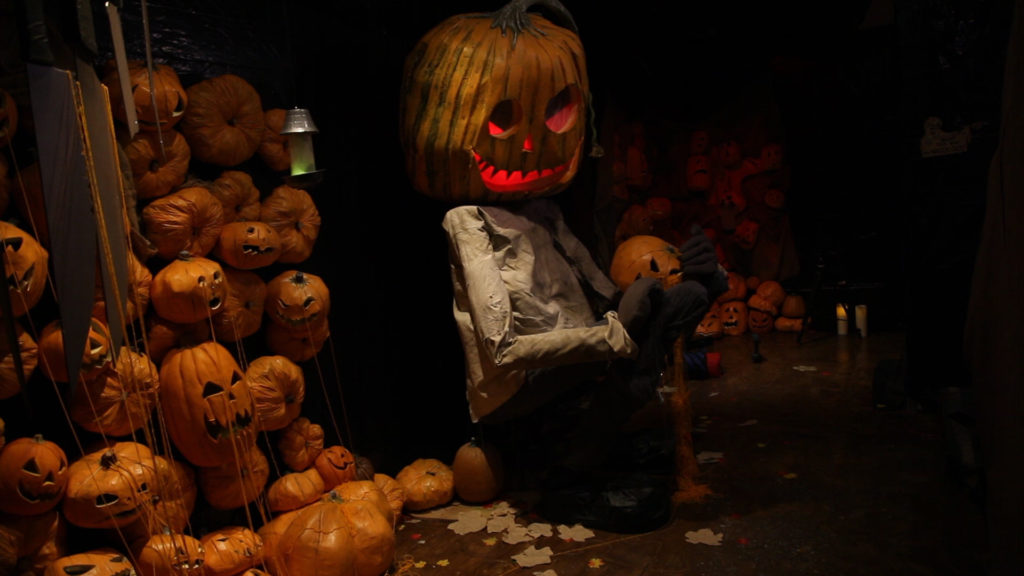 No trick, a Capp street artist’s space is planning a massive treat this Halloween – and needs your help pulling it off.

The Secret Alley and its gallery neighbor, The Galallery, have launched an online campaign to raise $7,000 to build what they describe as their most ambitious Halloween installation to date. Organizers are reluctant to give away too many details but say it will be immersive and include animatronic special effects and animated projections.

An artists’ space and home to community radio station BFF.fm, The Secret Alley has put on four Halloween installations since opening at 180 Capp St. in 2005. The Galallery, which showcases the work of emerging artists, joined the effort two years ago. Past installations have included a mad scientist’s lab, a UFO crash and a sprawling pumpkin patch featuring 10-foot tall animatronic pumpkin monster. (Editor’s note: A friend and I volunteered last year for vine painting duties.)

As part of their online campaign, The Secret Alley and The Galallery are offering rewards, like tickets and gifts, in exchange for donations. Shy on funds? You can also volunteer your skills or time. Read more about it here.

[Photo via The Secret Alley]

The Doc will see you now: Mission dive bar open in new location 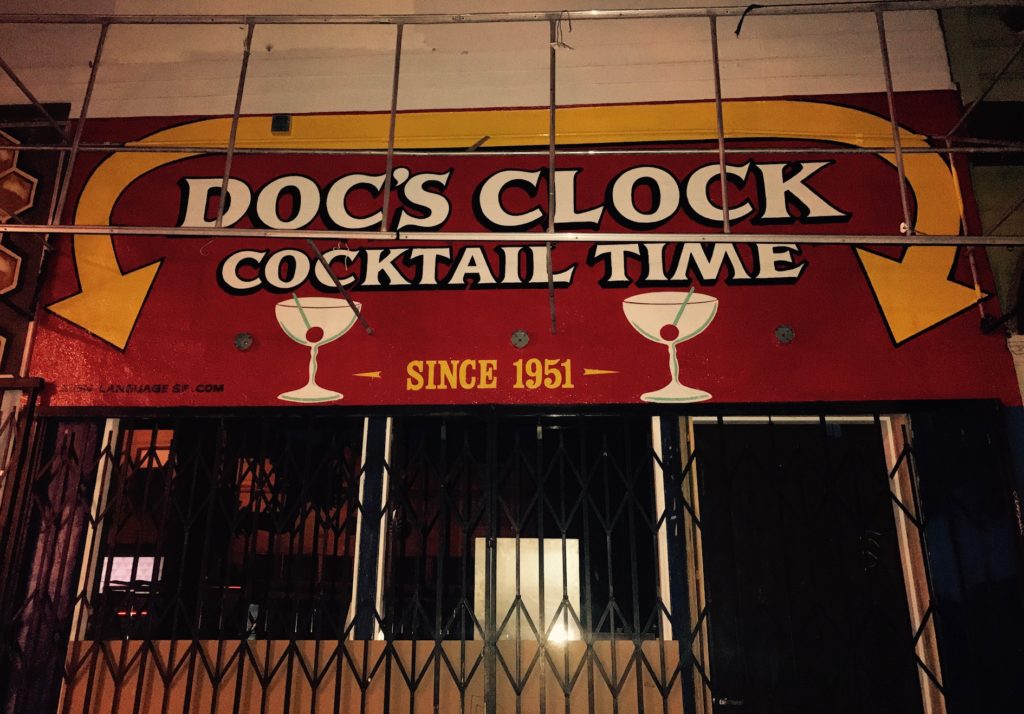 The Doc is officially in. After losing its lease and iconic sign, Doc’s Clock has reopened in its new Mission Street digs.

Tonight marks the bar’s official opening at 2417 Mission near 20th Street, although owner Carey Suckow wrote in an email that the bar quietly opened last week.

Started in 1951 and christened Doc’s Clock ten years later, the bar was forced to close last month after the new owner of its old building, 2575 Mission near 22nd, opted not to renew its lease. Negotiations with the landlord to bring the bar’s neon marquee also proved unsuccessful.

Suckow said the bar’s interior remains a work in progress. The bar’s shuffleboard made the two-block move on Saturday as noted by another Doc on Twitter:

Want to check the new space for yourself? Doc’s opens today at 5 p.m. 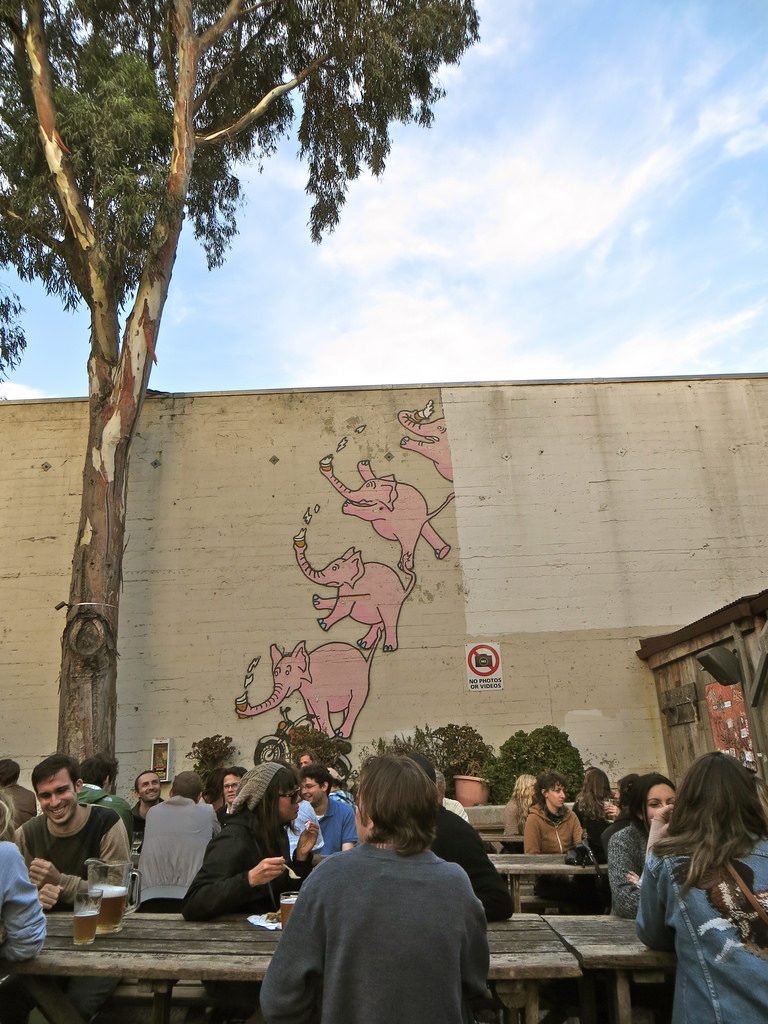 Already ample with a big backyard full of picnic tables, Zeitgeist wants to give you more to love.

The Valencia Street beer garden has applied to expand its liquor license to include a neighboring building purchased by the bar’s owners in 2016. A former sheet metal shop, 80 Duboce Ave. backs onto Zeitgeist’s backyard. Think the wall painted with tipsy pink elephants.

A yellow California Department of Alcoholic Beverage Control notice was recently put up in Zeitgeist’s front window, where it will remain for the 30-day approval period. 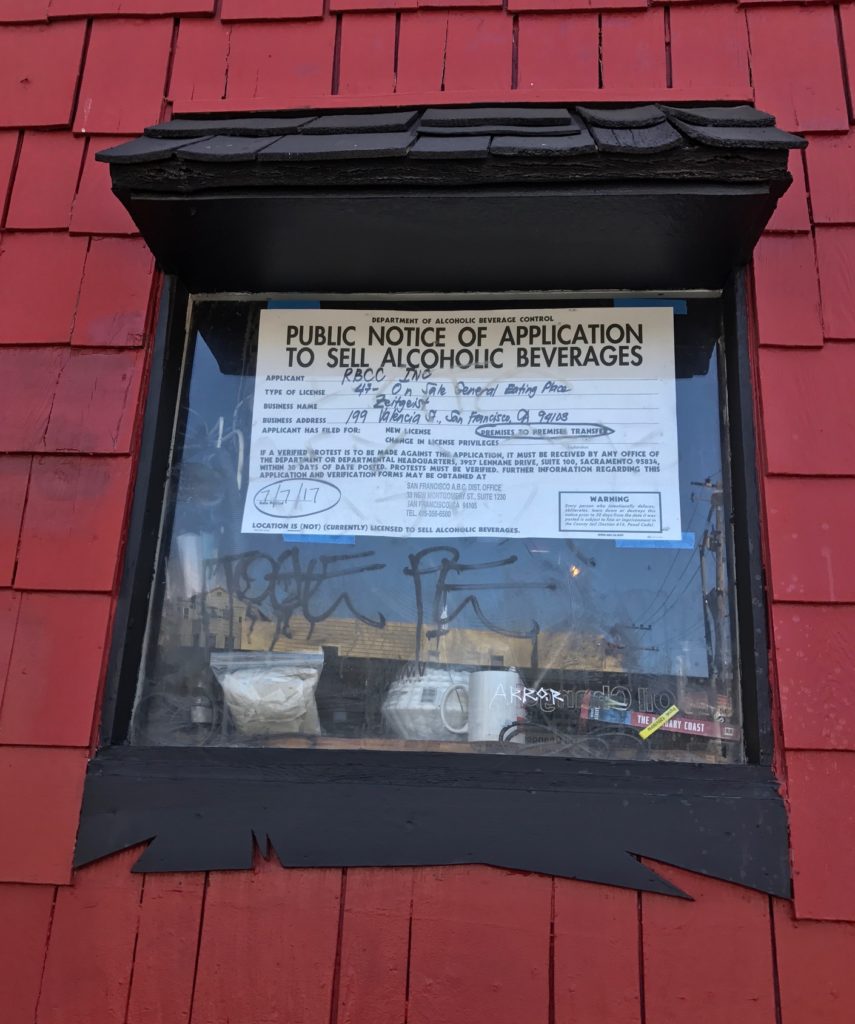 Angela Scott, one of the bar’s managers, said the adjacent building is about the size of Zeitgeist’s backyard, though plans are far from fleshed out in terms of what will be done with the space.

“We’re excited to see what happens,” she said. “Stay tuned.”

Whatever transpires, it’s a fair guess that it won’t encroach on the bar’s sun-soaked outdoor space. Zeitgeist fought plans to build condos across the street, arguing that they would cast a shadow over the beer garden and hurt business. In February, the San Francisco Planning Commission voted to reduce the height of the proposed five-story development by five feet. 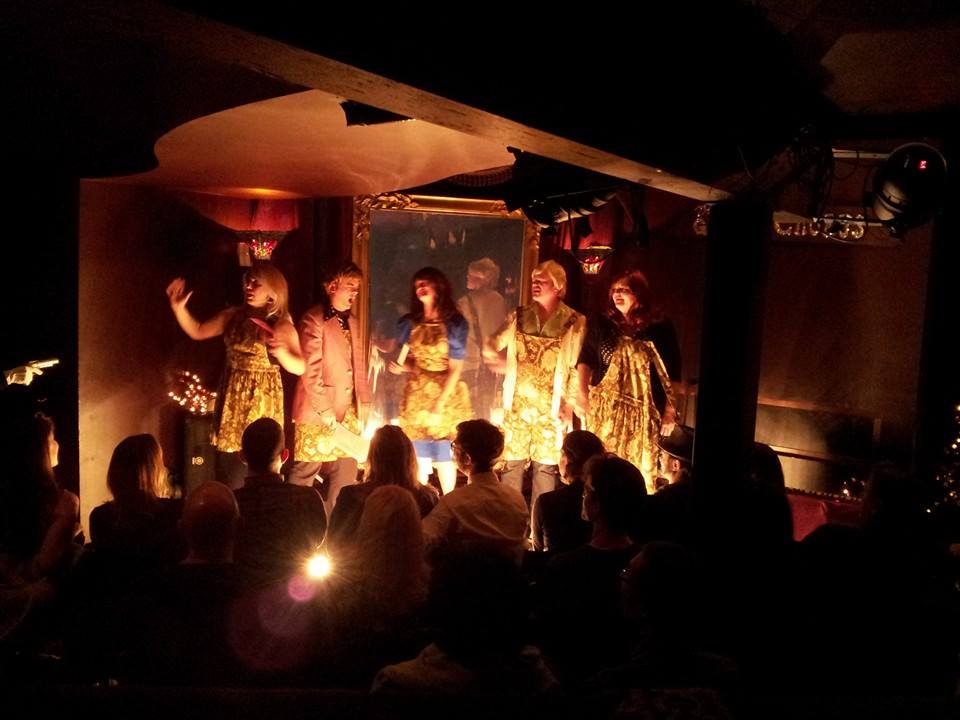 The Lost Church is one step closer to getting the city’s blessing.

At its meeting on June 22, the San Francisco Planning Department approved a permit to legalize the cozy Capp Street theater and music spot. Owners Brett and Elizabeth Cline, who have put three years of work into the effort, still have to get the approval of the Entertainment Commission and meet other requirements.

Since opening in February 2011, The Lost Church, at 65 Capp Street, has put on multimedia theater shows, book readings, movie screenings and hosted numerous live music shows. Designed by the late conceptual artist David Ireland, the space was previously permitted as a live-work space but has served as an artist studio or performance space for decades.

Though the Clines still have hurdles to clear, prospects for the theater look good. In materials submitted for last week’s meeting, the Planning Department noted that there was no record of opposition to the permit and that the site has been a performance space for 20 years with no history of complaints.

Although a hearing before the Entertainment Commission has not yet been scheduled, The Lost Church is compiling letters of support. If you’re interested in submitting one, send it to janitor@thelostchurch.org. 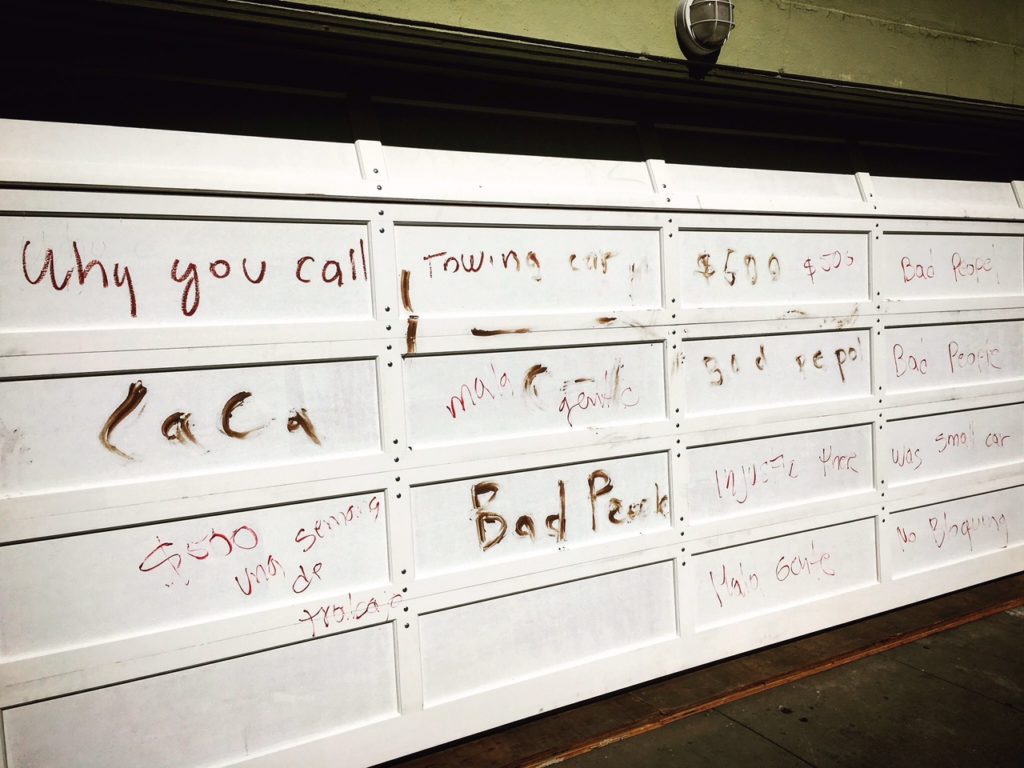 So we don’t really know for sure whether this angry car owner wrote part of this garage door screed in poop or not. (It kinda looks that way, and it does read “caca.”)

A few things are clear however: Someone, who got their small car towed, thinks the owner of this Capp Street garage is a really bad person and, well, parking in the city is some serious business. 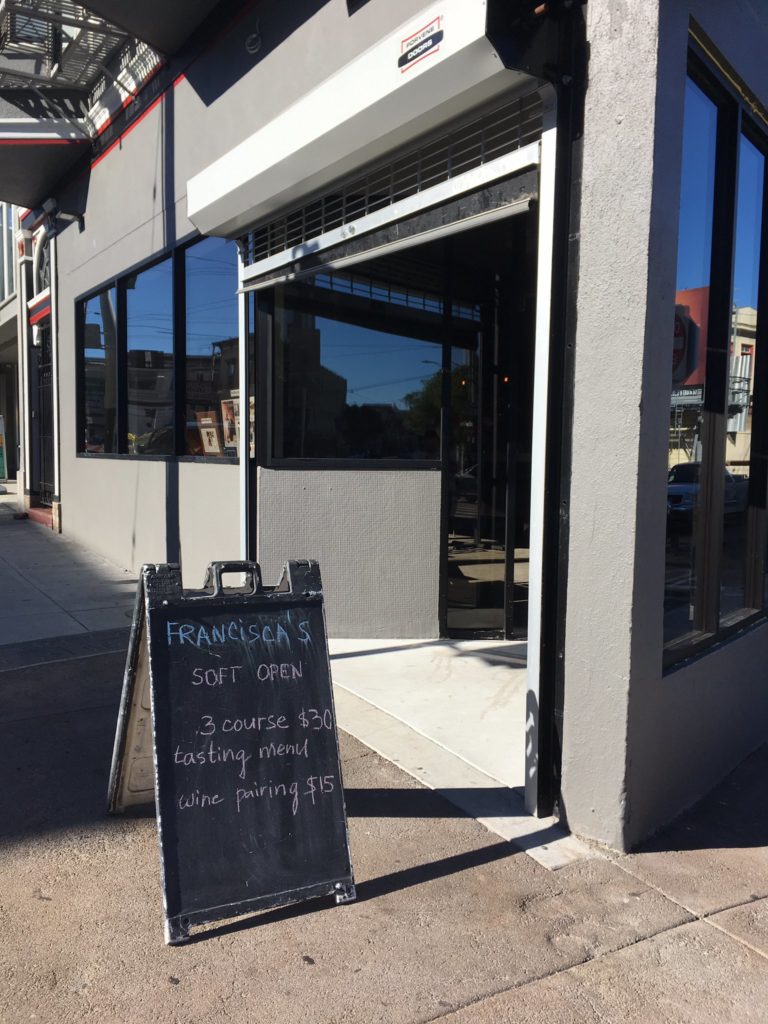 More than a year after a fire shuttered the restaurant and damaged apartments above it, the owners of The Palace are opening a new restaurant in the space.

Francisca’s, named after owner/chef Manny Torres Gimenez’s grandma, is expected to officially open around July 15, although a soft opening is going on right now. The restaurant is at 3047 Mission St., at Cesar Chavez.

Gimenez said the two-alarm fire on Dec. 10, 2015 gave he and his wife, General Manager Katerina De Torres,  “an opportunity to build everything from scratch for the first time in our restaurateur career and reinvent ourselves.

“The year and a half that we were remodeling we got a chance to travel around the world and got inspired by many dishes and we decided to add breakfast, lunch, dinner to the menu,” he wrote in an email. In addition, there is also a tasting menu option, a la carte menu, and also family style option.

The restaurant’s website offers this description: “We are farm to table restaurant, Californian cuisine and we pair with international and local beers and wine for a reasonable price.” You can check out Francisca’s menu here. 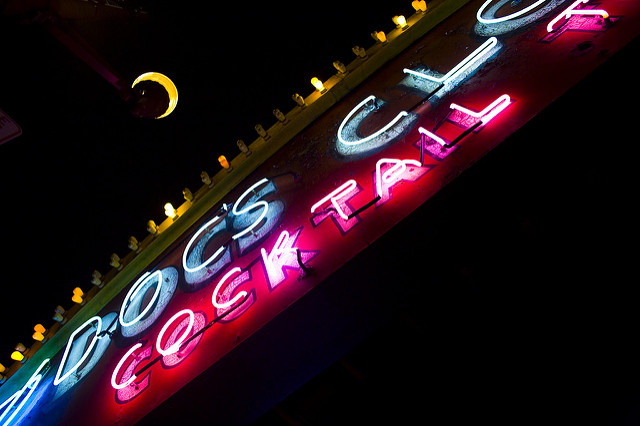 UPDATE 4 p.m.: In an email this afternoon, Doc’s Clock owner Carey Suckow said she has no idea what her landlord’s plans are for the sign but that something similar will be built at the new space.  Suckow also provided some background on the fabulous neon marquee:

In 1951, The Clock Tavern began operating at 2575 Mission
Street with Angelo & JN Nichols listed as owners. In 1961, a dentist
named Ralph Mancuso bought the bar. He was the “Doc” and changed the name of the bar to Doc’s Clock. He created the marquee that lights up Mission Street today.

ORIGINAL POST: Doc’s Clock plans to move to a new location in July, taking its shuffleboard and dive-ish vibe along. But, sadly, its iconic sign won’t be coming with.

Bar owner Carey Suckow confirmed yesterday that the bar’s sign — a neon beauty with “Doc’s Clock,” “cocktail time” and martini glasses on it — will be staying at 2575 Mission Street with her current building’s landlord after the bar lost its fight to keep it. It’s unclear what plans exactly the property owner has for the sign — including whether “Doc’s Clock” will remain on the front of the building. In April, Inside Scoop reported that Leticia Luna plans to combine the space with a storefront next door and that it will have a restaurant tenant.

Still, Suckow was optimistic about her new space at 2417 Mission St.

“Unfortunately, we just learned that the sign will not be coming with us,” she wrote in an email to Capp Street Crap. “We are saddened by this loss of our history, but we will rebuild one and it will be even better.”

I have reached out to Suckow for more details. In the meantime, check out the bar’s Facebook page, which will have updates on their move. The bar will close at its current location on June 3, and, if everything goes as planned, reopen at the new location in early July.