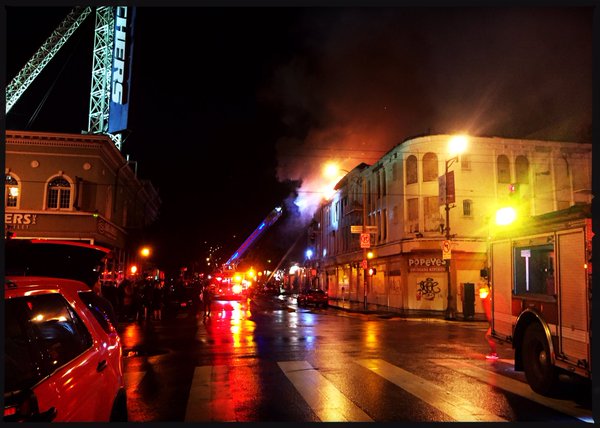 Lightning may never strike twice, but it seems fire can.

Late last night, flames broke out in what remained of a three-story building at Mission and 22nd streets, which had sat vacant since a deadly blaze there in January 2015.

The fire broke out just before 11:30 p.m. and was brought under control in about an hour, according to San Francisco Department spokesman Jonathan Baxter.

Baxter said the cause remains under investigation although an official on scene last night told reporters that squatters may have been to blame. From the San Francisco Chronicle:

Fire officials said they found evidence that Sunday night’s was sparked by homeless people living in the building.

Slated to be torn down, the building was destroyed in a Jan. 28, 2015 blaze that left one man dead and six people injured. More than 30 businesses were displaced and dozens left homeless.

Authorities determined that fire started inside a wall of the building and could not rule out an electrical fault.