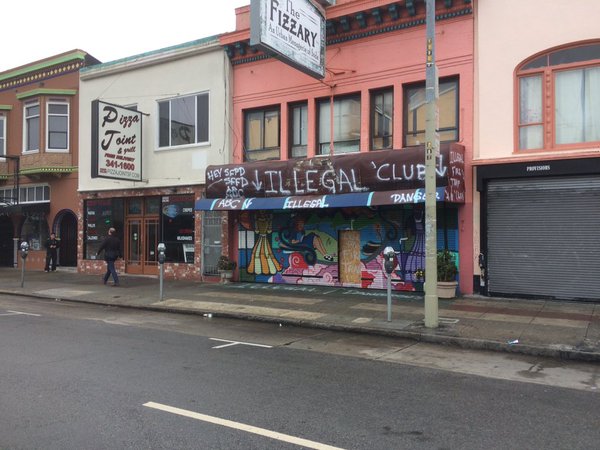 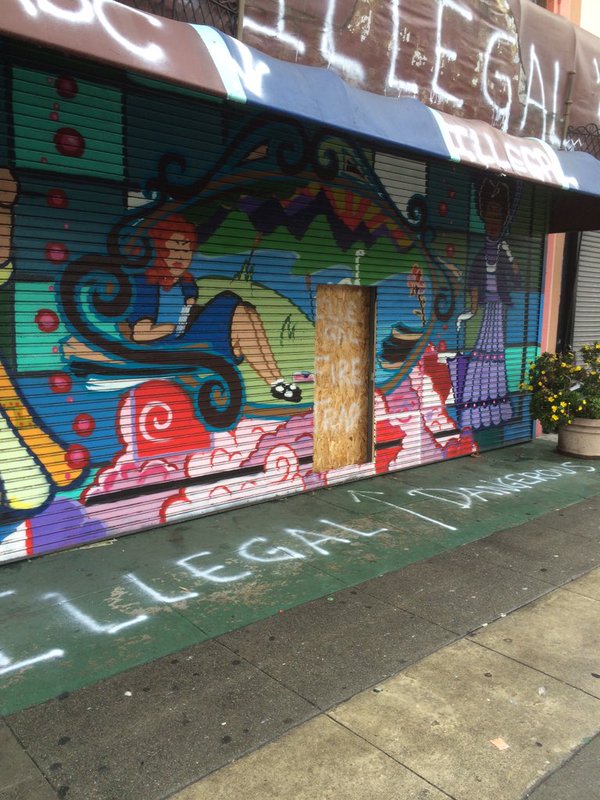 UPDATE 3 P.M.: Taylor Peck, the owner of the former Fizzary soda shop, told Capp Street Crap that he spray painted the messages on the front of the building yesterday in hopes of forcing authorities to do more about a dangerous new problem going on inside.

“I’m in a really frustrating situation and this was a last ditch effort to get some assistance/attention,” he wrote in an email.

When he first realized they were using the generator early Sunday morning, Peck said he called police, who alerted the fire department.

Firefighters yelled into the building “We aren’t going to leave until we hear the generator go off,” Peck wrote.

Though the generator was soon shut off and police shut down the party, Peck said officers told him they could not permanently shut the parties down.

“I asked the officers if they could advise [the subtenant] to ‘not start the party up ANY night’ and they said they wouldn’t/couldn’t,” he wrote.

After the generator was fired up again last night. Peck claims he called the police repeatedly starting at around 2:30 a.m. But an officer didn’t arrive until 7 a.m., after the party had ended.

Mindy Talmadge, a spokeswoman for the San Francisco Fire Department, confirmed that firefighters responded to 2949 Mission St. around 4:41 a.m. Sunday, made the party-goers turn off the generator and that police were called. She invited Peck to file a report with the department’s Bureau of Fire Prevention.

“The best thing he can do is when it’s happening, make the call,” she said.

ORIGINAL POST: Someone is none too happy with the all-night activities going on at what was formerly The Fizzary. At some point over the weekend, a vandal or vandals tagged the front of the one-time artisan soda shop with white spray paint.

The above photos shared with Capp Street Crap by Twitter user Eric D show “Illegal club,” “Hey SFPD and ABC” and “Danger” written in huge letters across the store’s awning and similar messages scrawled on the sidewalk in front. A piece of plywood, presumably the front door that peaks out from behind a cut-away section of security gate, says “illegal fire trap.”

The site of an Oct. 17 shooting, 2949 Mission St. is being used as an illicit nightclub with illegal gambling, according to authorities. You can read more of Capp Street Crap’s coverage here: