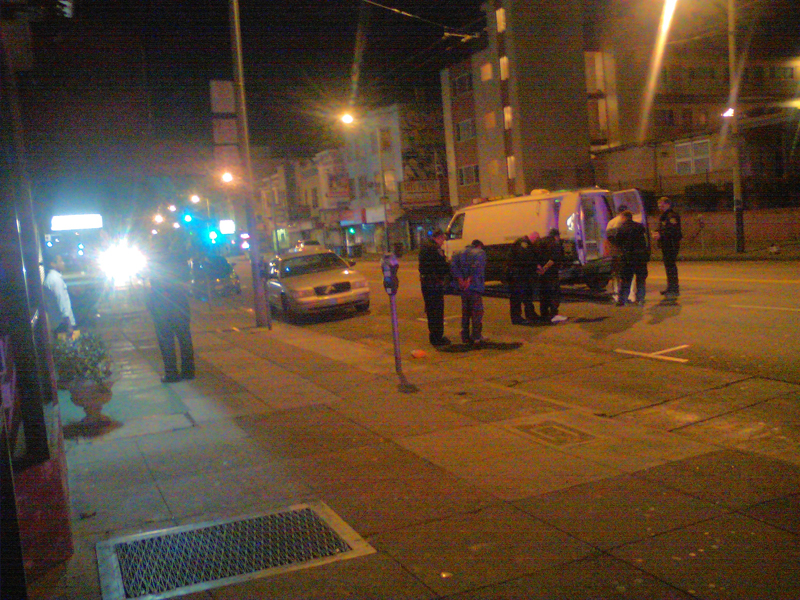 Sparks flew – literally – in the minutes before a shooting last month at an alleged Mission Street gambling den, a court filing shows.

The court filing describes a chaotic scene at 2949 Mission St. early on the morning of October 17 moments before gunfire erupted, leaving one patron with a gunshot wound to the leg. Witnesses working in the area heard a man and woman arguing loudly outside the building around 5:30 a.m. before the woman activated what appeared to be a stun gun, creating sparks.

“[One witness] stated he observed a female opening the front door and telling an unknown individual to leave the premises. [He] stated the female then brandished what appeared to be a stun gun, creating sparks with the stun gun but not attacking anyone with it …,” San Francisco Police Sgt. Adam Platinga wrote in an affidavit in support of a search warrant, taking excerpts from the police report. “Moments later, he heard approximately five gunshots and observed a large crowd fleeing the scene on foot and vehicles in the north and southbound directions.”

The former site of The Fizzary, an artisan soda shop, 2949 Mission had been a source of numerous noise complaints and other problems since September, dispatch records have shown. In the hours after the shooting, police seized five illegal gambling machines, hundreds of bottles of alcohol, documents showing illegal alcohol sales, two broken locks and a passport from the illicit nightclub, the affidavit said. The gambling machines contained $591.

Taylor Peck, who owned The Fizzary, said he subleased his old space with the best of intentions to a couple who said they planned to move their vitamin and wellness business there from a smaller space downtown. Everything seemed to check out with the supposed Herbalife affiliates. The couple had a baby with them, dressed well, drove a nice car and even brought the man’s mother, who co-signed on the lease, with them. The landlord also gave the OK, Peck said.

The only thing Peck recalled feeling uneasy about was that a vitamin store might be a little too boring for the neighborhood.

“My first response was ‘Damn, I shut my cool business and I’m opening up this not-so-exciting vitamin store,’” he said.

On the contrary, the new tenants brought plenty of excitement — of an illegal kind, according to the affidavit.

When officers arrived the morning of October 17 they found the store’s front door glass shattered and what appeared to be three bullet holes in the glass.

“I then heard multiple males inside yelling that there was someone that had been shot and I could hear what sounded like a female screaming in pain,” the affidavit said, quoting the police report. “The males inside of the location yelled they could not open the door because it was locked and they did not possess a key.”

Officers broke out the glass of the damaged door and found the person with the gunshot wound, described in the affidavit as transgender (though reports differ as to how the victim identifies), bloodied and lying next to a couch. The victim, whose injuries were not life-threatening, was treated at San Francisco General Hospital.

Since the shooting and execution of the search warrant, there has been at least one other police raid at the property, according to neighbors. Peck, who leased the space to the couple at the beginning of September, described how the couple went to great lengths to pull off the ruse. Early on they contacted him to ask if it would OK to hang a Herbalife sign over The Fizzary’s old one on the outside of the building. The company, they claimed, later nixed the plan.

“They were on their way to starting a speakeasy and they’re telling me they can’t put an Herbalife banner on the sign,” he said.

Already recovering emotionally, financially and physically from the shuttering of The Fizzary, Peck has a word to sum up how he’s felt since: deflated.