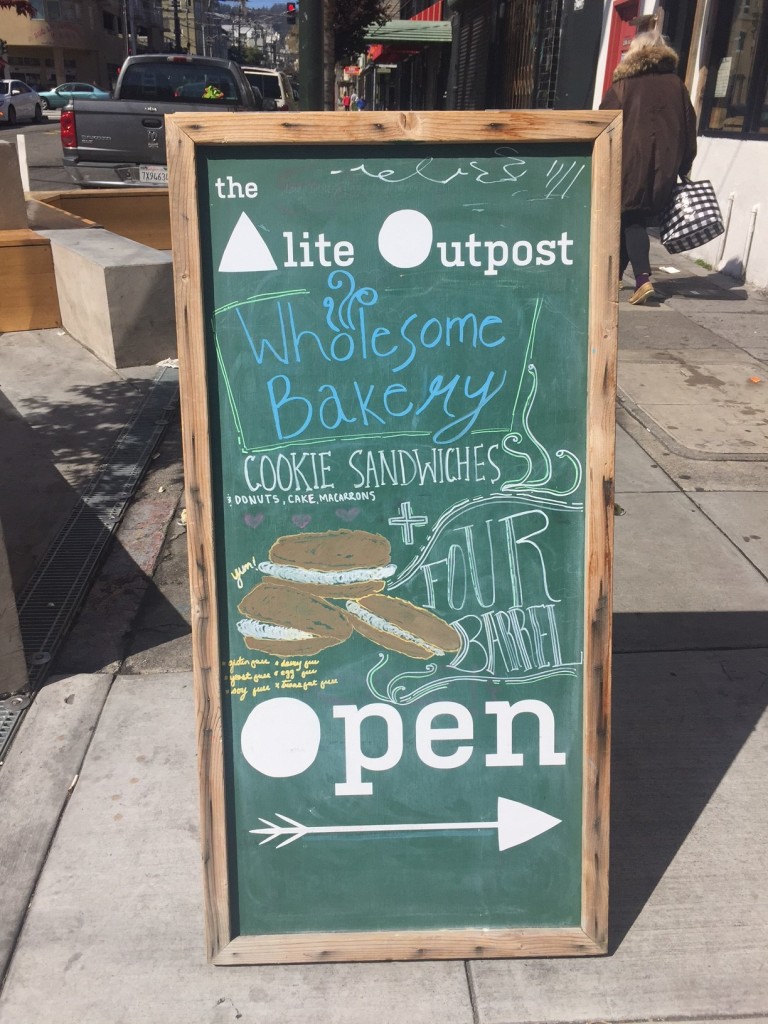 Months after a popular coffee shop there said goodbye, a vegan bakery has opened its café inside the Alite Outpost camping store.

One of the first all-vegan bakeries in the city, Wholesome Bakery moved into the camping store space, on 18th near Capp, about a week ago. Previously described by an Alite representative as its “incubation spot” for emerging businesses, the space used to be occupied by Tiny Warrior Coffee, which left last year after its lease came to an end.

According to its website, Wholesome Bakery makes baked goods that are “gluten free, yeast free, soy free, dairy and egg free, transfat free and low glycemic.” It was founded in 2009 and already sells its brownies and cookie sandwiches through a number of stores in the San Francisco and the East Bay including Bi-Rite Market. A sign outside Alite last week listed donuts, cake, cookies and macarons among the cafe’s offerings and said it serves Four Barrel Coffee.

Reached by email, bakery owner Mandy Harper said the café will have limited hours in the first few weeks, Thursday through Sunday from 8 a.m. to 4 p.m., and eventually will expand to seven days a week.

Operating out of Alite for about a year, Tiny Warrior left at the end of October shortly after announcing it had lost its lease. The coffee shop’s owners did not respond to multiple requests for comment at the time. But an Alite representative told Capp Street Crap back then that Tiny Warrior’s lease was never intended to be long-term.

“We took care of all the permitting and build-out expenses to help local people have a super low-cost way to get their businesses started,” Alite’s Amanda Durbin wrote in a October 2015 email. “The original intent was to have short-term leases for businesses to get their footing so that they could then graduate on to having their own spaces.”

Although Durbin said in that email that Alite’s goal is to have a new pop up every year, a fixed tenure has not been set for Wholesome Bakery, according to Harper.

“There’s no official date on anything,” Harper wrote. “We have teamed up and will continue to do so until we no longer want to. Simply put.”