After a tumultuous 2015, Dyke March returning to old route with new energy 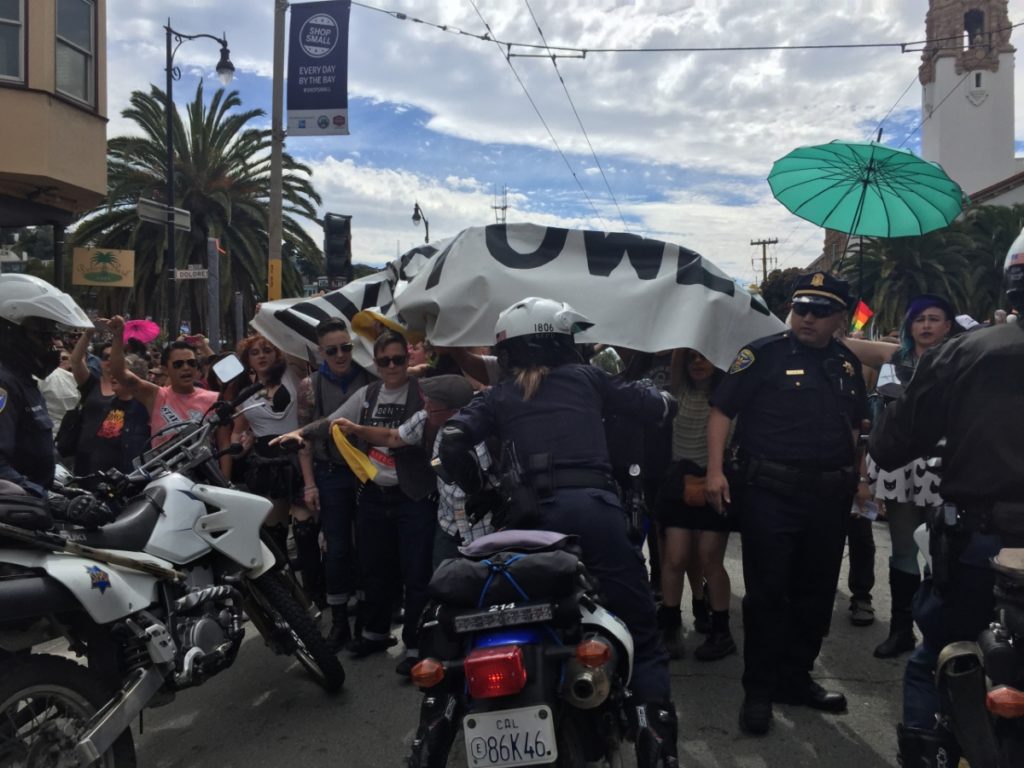 Joey “Cupcake” Stevenson woke up early that Saturday, a mess of nerves, and threw up.

Hours later, she, friend Kelly Robbie Hansen and a throng of supporters would stand off against a barricade of motorcycle cops to lead protesters along Dyke March’s long-established route.

Already feeling squeezed out after the recent closure of longtime lesbian bar the Lexington Club, the women were angry that Dyke March’s new route would bypass key landmarks. Stevenson just hoped everything would go well.

“I felt like I was putting 8,000 people at risk of being arrested,” she wrote in an online note penned several days after last year’s displacement-fueled “Take Back the Dyke March.”

Her accomplice Hansen recalls “feeling washed over with fear and excitement all at the same time.

“I was so fearful that the situation could turn violent if [police] weren’t going to let us pass and I was deeply concerned about the safety of the community I love,” she said.

Fortunately, the officers soon relented. Organizers of the sanctioned Dyke March, who’d changed the route for logistical reasons, weren’t as quick to let the protest go.

“They were pretty unhappy with us,” said Hansen, who didn’t know at the time just how tiny and thinly stretched the team that put together Dyke March was.

Feeling attacked despite a lot of hard work, Dyke March organizers agreed to meet with Hansen and Stevenson. Repairing the rift took time but Hansen ended up joining their committee while Stevenson now serves on the board of directors for Pride. Forces united, Dyke March will return to its normal route this Saturday — with new energy and more volunteers.

An anemic seven members last year, the Dyke March committee now stands at more than 20, thanks to interest sparked by the splinter march and stepped-up recruitment efforts, Hansen said. A new website has been launched and more money raised than year’s past. A May benefit at El Rio, for example, brought in $8,000 rather than the typical $6,000.

In addition, the march is embracing a similar battle cry to the splinter group. The theme is “Still here, still queer,” a stand against the loss of queer spaces and the displacement of San Francisco’s LBGTQ community. More effort is also being made to get the trans community, people who are gender non-conforming and members of the Black Lives Matter movement involved.

Though things are better for it, what happened last year was rough, said Elizabeth Lanyon, who has served on the Dyke March committee since 2013. While rumors circulated that a local restaurant owner had pushed for the route change, Lanyon said the decision was made to go down 17th Street, rather than 18th, because the top of Dolores Park was closed and organizers wanted to limit the impact on the park by setting up in the street closer to the portion that was open.

“Dyke March is an organization that means the world to me and to think that I did something to cause such divide in our community around something that is so sacred was really gut­ wrenching,” she wrote in an email. “It’s taken a while for me to shake that.”

Hansen said the splinter group meant no ill will against Dyke March. She now understands the pressure organizers faced and that they “worked with what they had.” The hope was to revive a protest spirit from years’ past.

“It was more like we’re doing this to take back a piece of this protest feeling. This we don’t need no goddamn permit feeling,” she said.

Take Back the Dyke March got its start with something less radical: a Facebook event page. Upset about explanations she was getting about the route change, Stevenson put it together, racking up, at one point, 5,000 invites in a day.

“It was like I lit a match and the entire forest lit up,” she recalled.

Organizing involved many people and was cobbled together in just two days.

“It was feminist punk rock,” said Stevenson, who marched in borrowed pink leather chaps, bullhorn in hand. “It was sloppy and beautiful and loosely held together with duct tape and safety pins.”

For whatever negative feelings that came up as a result, Lanyon said it was still “amazing because there was a real show of support and care for the March.

“That is all that [Dyke March] ever wanted,” she said.

Lanyon said she is looking forward to its return to Dolores Park on Saturday.

“We are going to spend a day celebrating in the park and then take to the streets to take up space, to be together in community in a city where our spaces are dwindling,” she wrote. ”To show San Francisco and the world that we are still here and we are powerful when we get together.”

Dyke March is looking for volunteers day-of. For more information, go to the volunteer section of its website.

One thought on “After a tumultuous 2015, Dyke March returning to old route with new energy”