What a relief! City working to boost bathroom options near 16th and Mission 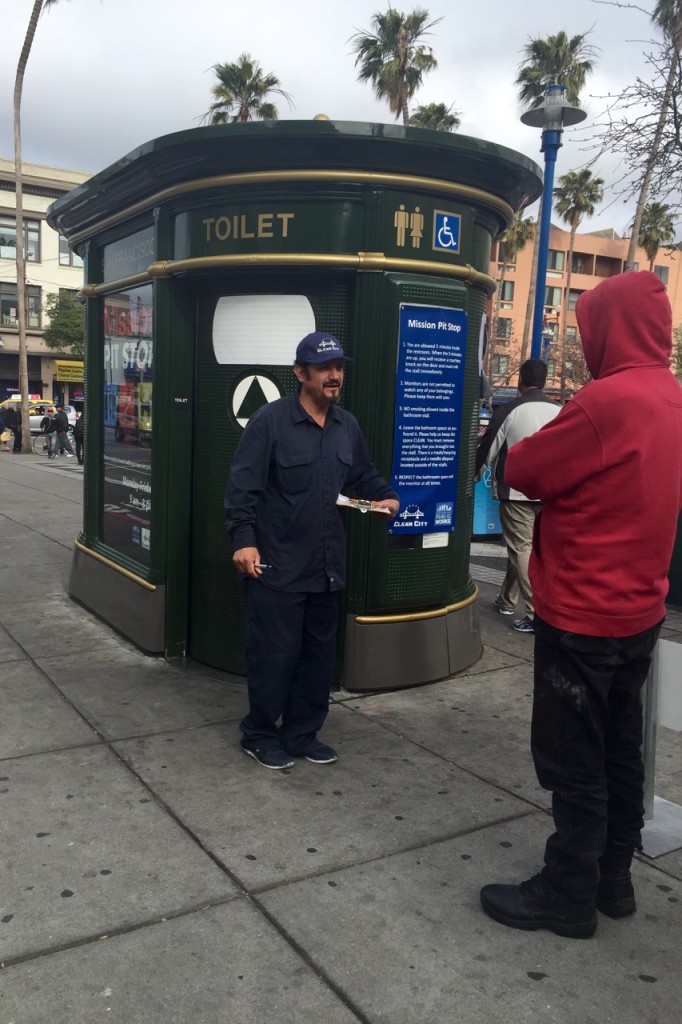 Breathe easy, the Mission’s poop problem might soon be a thing of the past.

Last week, with help from employees from the San Francisco Clean City Coalition, the city began staffing the green self-cleaning toilet outside the 16th and Mission BART station and installed used needle and dog waste receptacles nearby. Like the similarly named program started last year in the Tenderloin, Mission Pit Stop may eventually be expanded to include portable public toilets – on 16th between Mission and Capp streets.

Rachel Gordon, a spokeswoman for the Department of Public Works, said the agency has been talking with BART about trucking in the portable toilets to help keep the area around the station entrances cleaner but would still need to secure funding, pick the location and get the necessary permits.

The Tenderloin Pit Stop, also staffed by SF Clean City and serviced daily, has proven to be such a huge success, Gordon said, that public works expanded the program to 6th and Jessie streets in SoMa a month ago.

“This works because they’re staffed. People want to use them if they’re staffed,” Gordon said, adding that toilets also give dignity to people with few bathroom options. “There’s not going to be drug use or prostitution in there.”

SF Clean City’s staff already seems to be making a difference at 16th and Mission. In a matter of minutes during the evening commute on Wednesday, three people including a little boy stopped by to use the once-maligned automated JCDecaux toilet, and a queue had started to form. Roberto Rivera, director of operations for SF Clean City, greeted each person as they walked up, checked to make sure the bathroom was clean and watched the time to ensure no one was taking too long. Users are limited to five minutes.

Rivera said his presence not only solves the problem of people camping out in the bathroom, but it also gives people peace of mind that a stranger isn’t going to suddenly open the door when they’re inside.

“A lot of people are really happy to be honest with you. It’s nice that people can now use it,” he said.