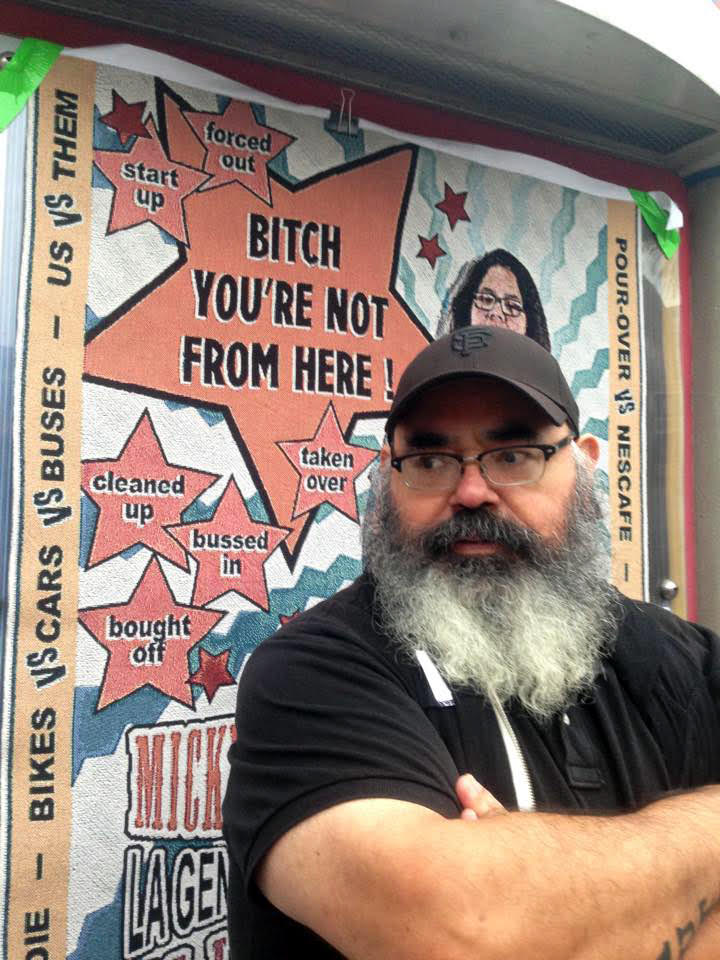 After months of work, Vic De La Rosa wasn’t about to let BART put the brakes on his art installation.

Denied permission after he was scheduled to display his controversial woven posters in cases at the 16th and Mission Street BART plaza, De La Rosa hung them there anyway on Tuesday for two hours during the evening commute.

Called “La Gente De Tu Barrio/The People Of Your Neighborhood [The Mission Suite],” De La Rosa’s four city-commissioned posters depict Mission residents and commuters connected by Muni on Mission Street along with words and phrases from the ongoing dialogue about the gentrifying neighborhood. But it was one poster in particular, called “Mickey,” that De La Rosa said led BART to halt the project right as it was scheduled to go up.

Mickey shows a tattooed Latina in a Giants shirt, surrounded by stars containing words like “priced out,” “start up” and “fed up.” The biggest star says “Bitch you’re not from here.”

Though BART expressed issues with the content in September, De La Rosa said he didn’t get final word that the agency was denying his permit until Oct. 22, more than a month after scheduled debut. Concluding he was being censored, he decided to hang the posters on the outside of the plaza display cases one week before the election to add to political discussions surrounding it.

“I knew this would be my only opportunity to have the work shown in its entirety on the site for which it was conceived,” he wrote in an email.

BART spokesman James Allison said that when the agency denied the permit for the artwork, BART’s art policy had not been finalized. It relied on its advertising standards instead, and the phrase “bitch you’re not from here,” was “judged to be profane and therefore not in compliance with the standards.

“BART is explicit in its goal to ‘maintain a safe and welcoming environment for all BART passengers, including minors who travel on or come in contact with the BART system,’” Allison said.

A San Francisco State University art professor, De La Rosa created the Lucha Libre-inspired posters for San Francisco Planning’s Art on Muni Poster Series, part of the Mission Street Public Life Plan. They were scheduled to debut in early September and be on display until the end of November.

Although San Francisco Planning proposed some solutions to address BART’s concerns, De La Rosa said the agency would not let Mickey be shown at all.

“As the artist I felt that my work was delivered complete and that I would not alter the work or show only part of the series as with any of the four pieces missing it would skew the tone of the piece in one particular direction,” he wrote. “My intent was to show the arc of sentiment in the Mission neighborhood today.” 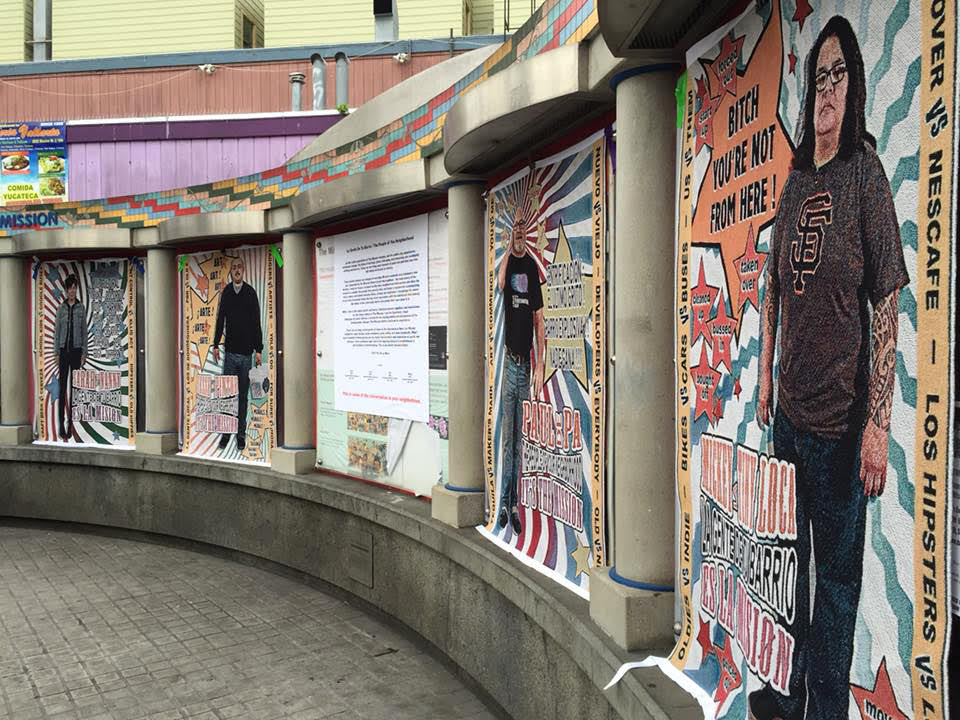 De La Rosa said one solution proposed – by Planning, not him – was blurring out the offensive words. He was told that was not a viable option and said he now wonders whether BART delayed rendering its final decision because they didn’t want the work shown before the election.

But Allison said blurring out the word “bitch” would have still left “you’re not from here,” language that is “demeaning or disparaging to an individual or group of individuals.

“BART categorically denies that the timing of the election had anything to do with the permit denial,” he added.

De La Rosa said, despite BART’s interpretation, reaction to his work Tuesday was positive with one obvious theme: Most people commented that Mickey was their favorite.