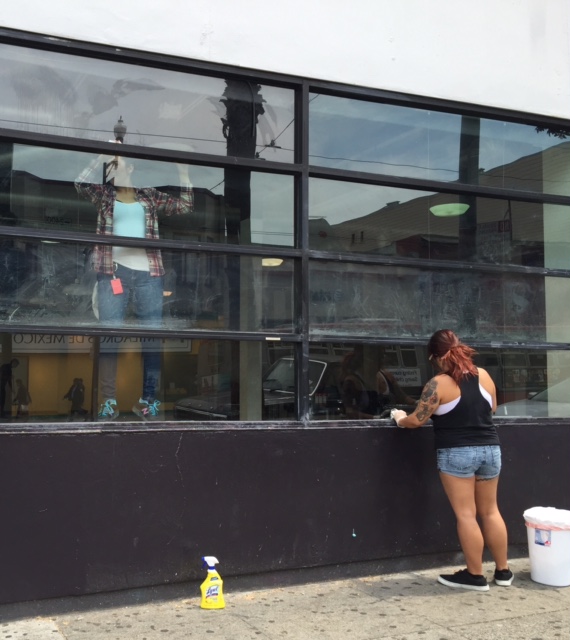 Airbnb advocates clean the windows of their new campaign headquarters at 20th and Mission streets.

The battle against a Nov. 3 ballot initiative to put the reins on vacation rentals will be led from the corner of 20th and Mission streets.

This afternoon, supporters of Airbnb-sponsored San Francisco for Everyone were busy cleaning windows on the former T-Mobile space at 2401 Mission St. Desks had already been set up inside, although a woman working outside told me their campaign office won’t officially open there until August 15.

On July 14, ShareBetter SF’s measure was certified for the November ballot. Among other things, it would limit short-term rentals to 75 days a year, prohibit the short-term rental of in-law units, make it a misdemeanor for sites like VRBO and Airbnb to unlawfully list a unit as a short-term rental, and allow interested parties to sue such companies for violations. ShareBetter SF describes itself as a “coalition of landlords, affordable housing proponents, advocates for seniors and the disabled, labor unions and civic leaders, all concerned about the significant adverse impact Airbnb rentals are having on the availability and affordability of housing in the city.”

But San Francisco for Everyone claims the initiative will give people a financial incentive to spy on their neighbors, file countless lawsuits and take away extra income from San Franciscans who need it to stay in their homes.

“The home sharing ballot measure would ban the short-term rental of in-law units that thousands of San Franciscans have rented out for decades, and unfairly applies different regulations to different parts of the city,” its website read.

It would be a fair guess that San Francisco for Everyone is paying a ton of money for their new space. According to Mission Local, T-Mobile moved out of the 3,000 square foot space and into a smaller one down the street last year because of the increased rent.