Bitcoin burning a hole in your virtual wallet? There’s a store in the Mission to spend it in 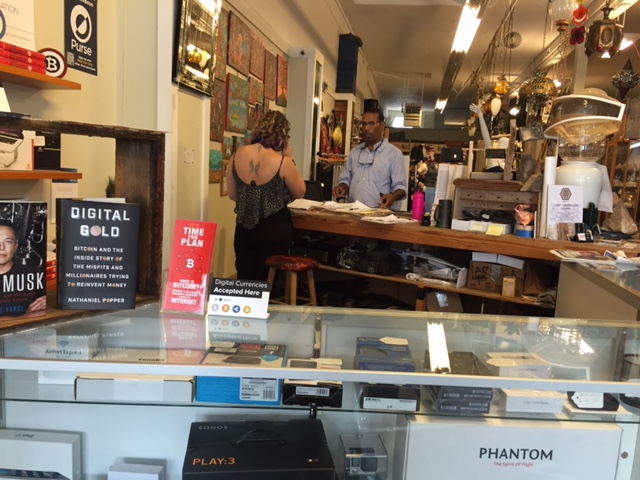 If the Mission hadn’t reached peak tech yet, we now have a Bitcoin store.

Billed as San Francisco’s first Bitcoin brick and mortar, Nakamoto’s sells electronics and accessories at discounts 10 percent below Amazon prices but only if you’re paying with the fledgling digital currency. No Bitcoin? No worries, the store has two Bitcoin ATMs, technically “BTMs.”

Named for Satoshi Nakamoto, Bitcoin’s mysterious alleged creator, Nakamoto’s is in what used to be the 20Mission co-working space near 20th and Mission streets.  The old business was forced to shut down last year because of a zoning issue and was reborn as 20Mission Hive. In addition to Nakamoto’s, it now hosts a number of designers selling handmade items including jewelry and clothing, some of which also take Bitcoin.

No one replied to an email sent through Nakamoto’s webpage last week but based on an article by Bitcoin publication CoinDesk it appears the store opened around early February. It was launched by startup Purse to “demonstrate the advantage of using Bitcoin to mainstream users.”

Curious, I stopped by Nakamoto’s last week. One of the store’s two BTMs was apparently the first one in San Francisco. As SFist reported last year, BitAccess held an unveiling event when they installed that machine in the Financial District’s Workshop Café in September. For whatever reason, it has since been rehomed. It was not working when I tried to use it.

On a second visit to the store, a woman who worked there explained that shoppers could select from a list of items to order at a discount off of Amazon or buy any of the items on display there on the spot. An Elon Musk biography sat atop a display case next to pamphlets that described Bitcoin as the “most disruptive innovation since the Internet.” There was an iPad and Sonos and Roku systems for sale, Bitcoin t-shirts and patches and, yep, even a drone.

As enticing as that all was, in the end I decided to hold onto my cash – the green kind.