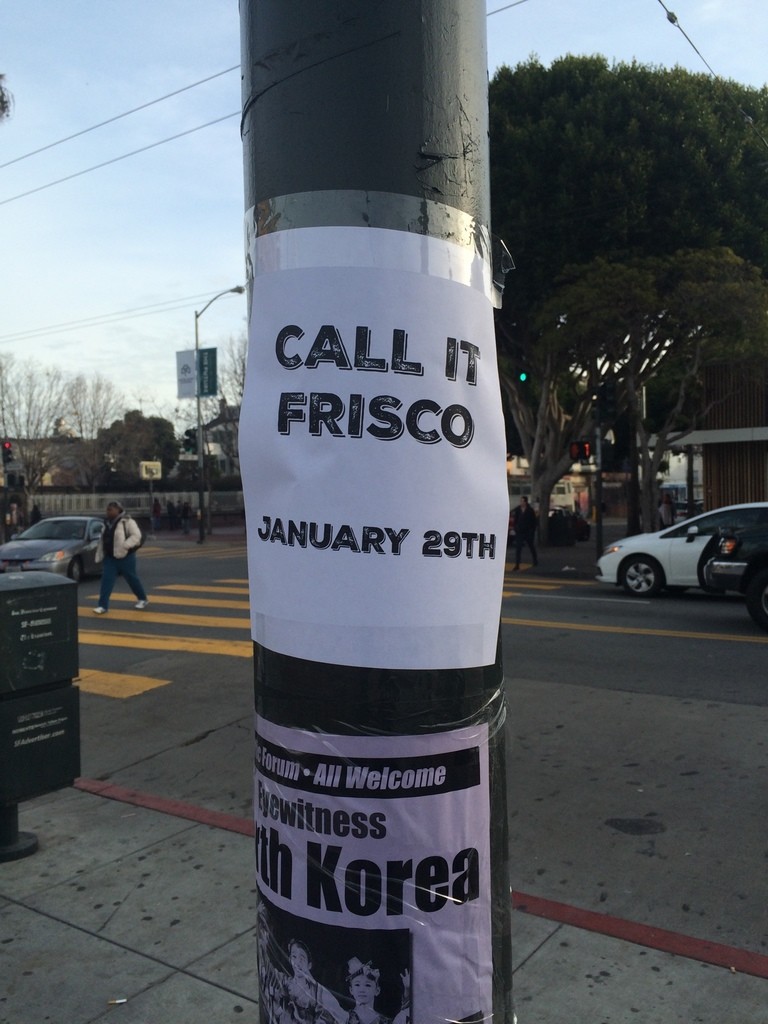 UPDATE 1/21: It turns out those “Call it Frisco” fliers aren’t some art school project after all. In a post today, SFist reveals it was all a promotional effort by BuzzFeed SF, which tweeted a URL this morning explaining a little more:

For too long, the Bay Area has been torn apart by one very important question:

How should you abbreviate San Francisco?

“San Fran” is much too nasal. “SF”? It’s the opposite of mellifluous. “Paris of the West”? I mean… okay. It’s all been so confusing. Until now.

Frisco’s roots – in Gold Rush California – are as deep and nuanced as the city itself. It’s the chosen nickname of Jack London and Otis Redding; Irving Berlin and ’90s Bay Area rappers; sailors and the Hells Angels; the vital blue collar core of our city. It’s fast. It flows off the tongue. It pisses off tech bros. It is, in fact, totally fucking awesome. That’s right, San Francisco, hold onto your hoodies: It’s time we reclaim “Frisco.”

And, yes, look, we know what Herb Caen said. And we’re aware of Emperor Norton’s fines. But conformity is lame. And honestly, the opposite of the spirit that built this great city.

So, look, for this one day, January 29, you have a pass. You can call it Frisco. Go ahead! It’s fine! Sing John Kanaka, and contemplate the Hell’s Angels. Call it Frisco, and sit by the Bay. Don’t worry, you won’t be alone. We’ll do it too.

Join us January 29th for a special Call It Frisco Day celebration – details to follow.

ORIGINAL POST: Evidently Jan. 29 is piss off your friends and neighbors day. Seriously though, what is up with this mysterious flyer? The above photo was taken near the 24th Street BART. I spotted another one of the flyers near Mission and 16th.