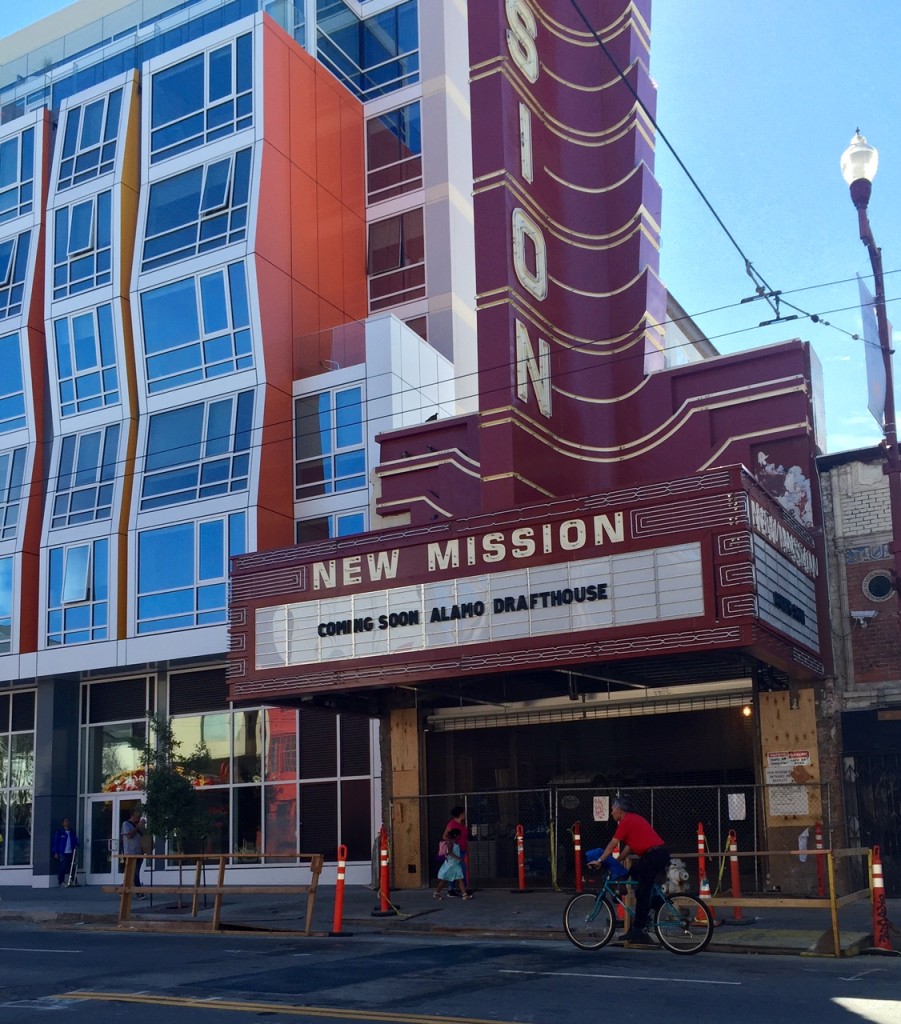 Not far from where the entrance to Alamo Drafthouse at the New Mission will be, “drink on champagne lover” is written on a wall. It’s one of several spray-paint souvenirs from a rave that happened there in 2006. There’s a lot of exposed drywall, sections of plaster missing and so much scaffolding you’d think you were in SoMa.

And yet the soon-to-be resurrected movie house still stuns.

Nearing the home stretch of $10 million in renovations, the theater is expected to open this fall, possibly in November. On Friday, Capp Street Crap got glimpse of the theater’s soon-to-be grand interior.

Far more massive than it appears from the street, 2550 Mission St. ceased operations as a movie theater more than 20 years ago. It was empty when the Texas-based Alamo Drafthouse bought it in 2012, but it had had a long run as a furniture store. “Bunk Beds Futons” is still written in huge block letters, along with a couple of up arrows, below a landing and an elegant gold bannister that survived those retail years intact.

Many other old elements also remain: The theater’s 1930s mirrors were recently unearthed, vintage light fixtures now hang from the ceilings, and crews have begun to painstakingly repaint and restore its intricate ceilings and décor. Mike Keegan, the theater’s creative manager, said architectural historians have even been consulted for the project, and the goal is to match the former movie palace’s paint “as much as we can.”

The improvements aren’t just indoors. The New Mission’s 70-foot-tall sign and marquee have already been restored. The letters will soon glow green with illuminated yellow accents on a red background.

Declared a historic landmark by the city in 2004, the cinema – or at least the front portion of the building – dates back more than 100 years. A 2014 planning department document says that it was built in 1910 and renovated in 1916 by noted San Francisco architects the Reid Brothers, who added the theater’s three-story main auditorium along Bartlett Street along with “Neo-Classical Revival details.” Another renowned architect, Timothy Pflueger, is responsible for the balcony and the mezzanine and renovated the Mission Street façade in the Art Deco style in 1932. 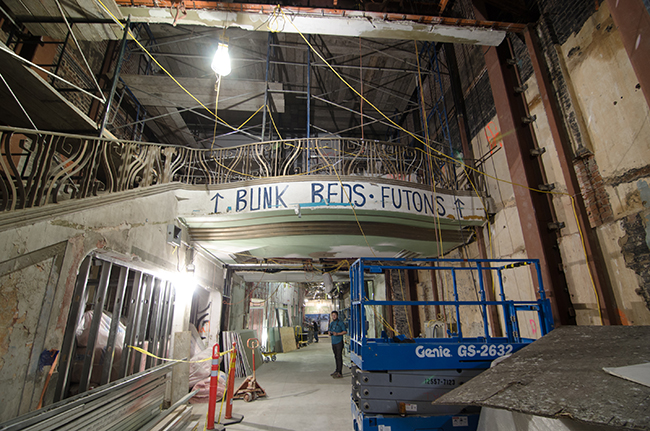 The lobby/entrance of the theater [Photo by Jacob Zuckerman, courtesy of Alamo Drafthouse]

A neighborhood movie house throughout its tenure as a theater, the New Mission showed mostly grindhouse films in the 1970s, then c-grade action movies in the 1980s, Keegan said. Movies with Spanish subtitles, like Terminator II, screened during the short time it was open in the 1990s.

While a lot of the renovations will pay homage to the theater’s past, plenty have been planned with the modern moviegoer in mind. Along a wall that still has holes from the old projection booth, crews will build a bar called Bear vs. Bull, open from 2 p.m. to 2 a.m., movie ticket not required. A menu of bar snacks is also being crafted, Keegan said.

Once a massive 2,000-seat theater, the reborn New Mission will now have five smaller screens. The biggest theater will hold 320, another will have 90 seats, and there will be three micro-theaters, capacity 34, 34 and 42. Patrons will watch preshows, instead of advertisements, film shorts produced by an Alamo Drafthouse team that relate to the movies being screened.

Before the movies start, servers will walk around to answer questions about the food and drink menu, and patrons will be able to place orders from their seats. Staff will also check to ensure people aren’t on their cell phones. One infraction will get you a warning, a second gets you kicked out without a refund.

“We’re really serious, serious about the movie-going experience,” said Keegan, who got to witness the benefits of the strict cellphone policy firsthand at the Alamo Drafthouse theater in Austin. “You get so used to how nice it is.”

(If you want to know how serious the theater is about its no-phone policy, check out this hilarious voicemail message from an ousted patron at its Austin location. Language NSFW)

When Alamo Drafthouse first bought the building in 2012, the hope was to have the theater open in 2014. That timeline was pushed back due to what Keegan describes as “the slow grind of a project this size,” and the fact there were a lot of requirements to meet given the building’s historic status.

The ranks of the construction crews seem to grow the further along the project gets, Keegan said, although he admits there’s still much work to be done before the theater’s re-opening.

“Everyone is pretty confident though,” he said.

Want to see more of the theater construction? Check out the slideshow below. Photos by Mike Keegan and Jacob Zuckerman.

One thought on “Sneak preview: Alamo Drafthouse at the New Mission”