Pops (not the good kind) at the old Fizzary 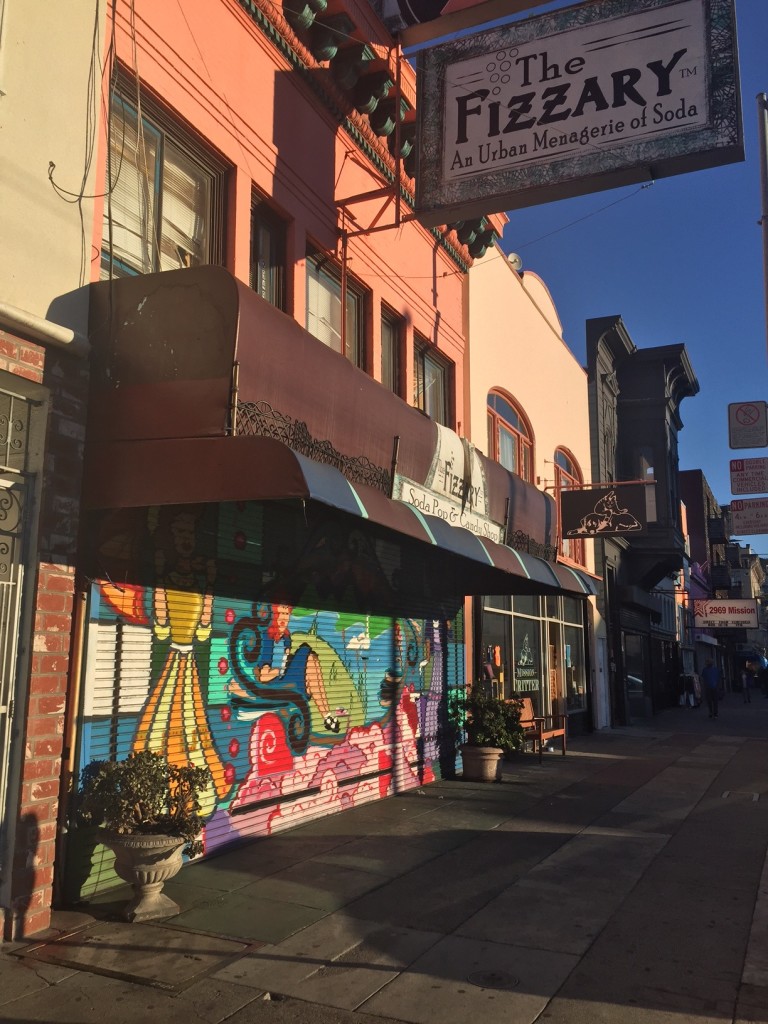 Shots were fired from Mission Street early Saturday morning, striking a man in the leg who was inside a location that authorities said was an illegal gambling den. Neighbors confirmed the shooting was at the site of the shuttered artisanal soda and candy shop The Fizzary, which they also said was the target of frequent complaints in recent weeks.

Police provided few details other than that, shortly before 6 a.m., someone on the 2900 block of Mission Street fired several rounds, one of which went through the front door of the business and struck a 25-year-old man in the lower left leg. He was taken to San Francisco General Hospital with injuries that were not life-threatening.

“There have been no arrests made yet,” San Francisco Police Department spokesman Albie Esparza wrote in an email. “It is unknown what the motive of the shooting and/or suspect was since the victim was inside and the shots were fired from the exterior per the victim.”

Andrea Guzman, a spokeswoman for the San Francisco City Attorney’s Office, which has been cracking down on alleged illegal gambling establishments in the city, said she spoke with code enforcement but couldn’t share much.

“They are aware of this situation and our office is looking into it,” she said.

Neighbors and workers on the block who spoke with Capp Street Crap said they weren’t sure who was using the old Fizzary space, at 2949 Mission St., but there is often loud music and noise coming from it late at night.

One woman, who lives and works on the block and didn’t want her name used, said that on the morning of the shooting, she heard five gunshots sometime between 5:05 and 5:20 a.m. Officers soon arrived and taped off the block, which is between 25th and 26th streets.

“It’s kind of crazy what one spot can do in terms of drawing in negativity,” she said.

Tim Costigan, whose pet store Mission Critter is right next door, said he only learned later from neighbors what happened. But even before the shooting, he said he “heard all kind of wild stories” about what was going on in the space.

A couple of people told me they thought the store was being rented out for parties. But Costigan said, based on what he’s heard, it seems like it’s being used as more of an after-hours space. Even so, a couple of Sundays ago, he said, one of his employees heard “loud, thumping music” coming from the space throughout the day.

Neighbors who live above his store and above the neighboring pizza shop have called police repeatedly for various disturbances associated with the space, he said.

It’s disappointing that what used to be a nice soda shop has “turned into this sort of neighborhood nightmare,” he said. “I’d love to have a legitimate business next door.”

The Fizzary and its sister location on Haight Street closed earlier this year. In a May post on Craigslist, co-owner Taylor Peck said they were selling the Mission retail spot to focus on wholesale and that the property’s “favorable lease extends up to 8 years at $4000.”

It is unclear who, if anyone, took over The Fizzary’s lease. An email to the store’s parent company, Taylor’s Tonics, was not returned. According to city property records, 2949 Mission St. is owned by Roberto T. Sanchez.

While neighbors said the store’s metal rollup door is most often left down, a visit to the store on Monday morning, found it half-open. What looked to be sheets of black rubber covered the outside of the windows and particle board was affixed to the front door.

Costigan said the black material was put up because the front windows of the store were previously broken, noting that the space has looked “really, really sketchy,” as of late. He wonders whether the shooting will force whoever is using it to do something legitimate, or move on.

“My hope is with this last weekend, they are going. But I don’t know,” he said.