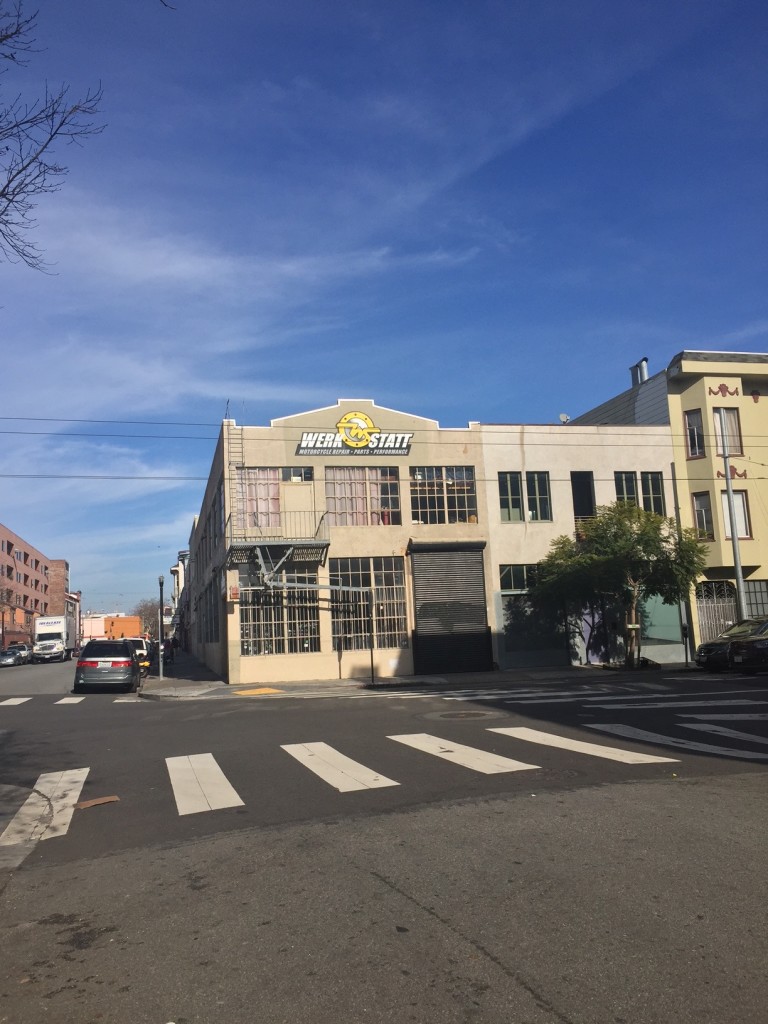 Werkstatt Motorcycles, one of the first woman-owned motorcycle repair shops in the country, closed its doors last month after 21 years in business. The shop’s old building, on 17th at Capp Street, will be leased by a construction company, which will have its headquarters there. Capp Street Crap chatted over email with Jennifer Bromme about the history of the shop, her decision to close and what she has planned next.

How did you end up opening your own shop?

I learned how to work on motorcycles in Germany in a three-year apprenticeship. When I came here, I first worked for Scuderia West. After 8 months I decided to open my own shop, and got a space in the back of my then-boyfriend’s welding shop in SoMa. Word got around that I was doing a decent job and I had more work than I could do by myself, so moved to a building on Harrison and Mariposa and started hiring people to help me with the ever-increasing work load. I made it a point to hire as many women as I could, but it was not easy to find them. Most of my employees and customers were male.

After a couple of years I was evicted to make room for live-work spaces – remember those? I moved to the space on 3248 17th St. in 1998. It was expensive at the time but I didn’t have a choice, the city was changing and it was hard to get a space. In 2001, my initial 3-year lease ended but I was able to stay at increased cost and keep being open for business. In the last recession I was able to secure a long-term lease. So I’ve been through a couple down turns and an ever changing city. I guess that’s urban living! Things always change.

According to your website, Werkstatt was one of the first woman-owned motorcycle repair shops in the country. Was that your understanding anecdotally, or did you know of any other women like you when you started?

There was one other shop that was owned by a woman in SF at the time, Cycle Source. She closed her shop in the first dotcom when the rents went up. Then there was Mission Motorcycles which was bought by Wendy Epstein a year after I opened my business. She closed her business a year ago also. I wasn’t aware of other shops owned by women at the time, but there are probably a few. One was owned by Theresa Wallach in the 50s or 60s I believe. She wrote a couple of books, one of the called “The Rugged Road,” chronicling how she rode a motorcycle with a trailer from England to South Africa in the 1920s. I did believe for a long time that I was an ice breaker into the male dominated world of motorcycles, turns out there are many of us (although a small percentage overall). It’s just not widely publicized.

What were the initial challenges you faced? Were you easily accepted?

I definitely was much more accepted immediately than I thought I would be. People were curious what a woman could do and brought their bikes to me to find out (charging $28/hour also helped). Of course, there are those that weren’t comfortable with a woman repairing their bikes but they didn’t show up in my shop to begin with. I did get quite a few people that wanted to speak to my husband or a guy that was working for me, but most of the time people just did a double take, then gave me the keys, picked up their bikes after the repairs were done and it was not too big of an issue. I just killed them with knowledge (and a little kindness).

It sounds like you weren’t yet fluent in English when you got started in San Francisco. What was that like, building a business with that added challenge?

People loved the German accent and Germans do have the reputation of being good mechanics so it actually helped me. And since it’s motorcycles, a lot of communication can be done with pointing, or making the noise that was cause of concern, and I could test drive, diagnose and fix it from there. Being immersed in the language I learned quickly so it wasn’t really an issue after a year or so.

How did your love of motorcycles get started?

I bought a single cylinder motorcycle when I turned 18 against the wishes of my parents and took it all over Germany, Italy and Greece. It broke down a lot so I learned to fix it from friends. It turned out I had a knack for it so eventually I decided to do an apprenticeship to go more in depth.

Looks like you’ve done a great deal of racing and had a rather traumatic crash that led you to break your hip. What happened?

I raced sidecars, then a 400cc and then crashed racing a 750cc at 100 mph. I took a big break after that crash, but eventually got talked into racing a little vintage 160cc for a weekend. I placed third right away that first weekend, so I kept doing it. in 2010, I got interested in electrical motorcycles. I placed second in the inaugural TTXGP and then raced in Europe for the international part of it.

You closed your shop to spend more time with your children, correct? What are you plans now?

Yes, I have a 3 and 4-year-old that are growing up very fast. I couldn’t run the shop efficiently part time so I decided to close it and become a full-time mom. Although I loved doing what I did for 21 years, being a mom is now the most important thing to me. I will still be involved in the motorcycle industry in the future, teaching people how to work on their own bikes. Raising two outstanding human beings is a worthwhile use of my time for the next few years. As for what is next career wise, I have not decided. But I will be taking a big sabbatical to think about that!