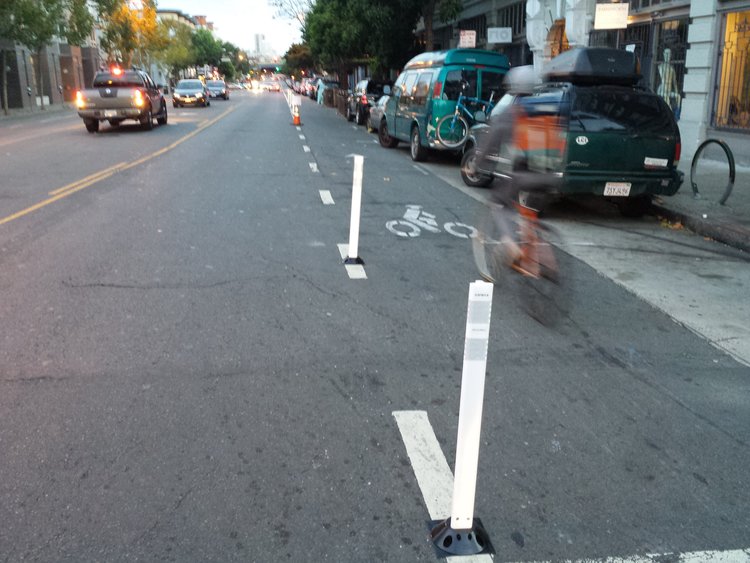 UPDATE 10/16: SF Transformation tells me the Valencia Street barriers have been removed but that the group will continue its efforts at that location and others.

“We and our members demand immediate action from the SFMTA to replace the protected bike lanes they removed with infrastructure as good or better,” SF Transformation wrote in an email. “People are dying & getting disabling injuries on these streets and they aren’t moving fast enough or taking this serious.”

UPDATE 5:50 p.m.: While he did not comment on the Valencia Street barriers directly, SFMTA Spokesman Ben Jose said generally the agency must remove unapproved cones and posts because its a code violation to put things in the road “and they can create conflicts for various types of traffic.

“We certainly understand that people are passionate about safety. We are too,” he wrote in an email. “In 2010, we had zero miles of protected bike lanes and buffered bike lanes in San Francisco. Since then, we’ve installed 27 miles of bike lanes that are either protected from traffic by things like parked cars or curbs, or have a space buffer between them and vehicles so people on bikes are safer.”

ORIGINAL POST: An activist group known for erecting its own safety barriers in areas of the city it deems dangerous for bicyclists and pedestrians has turned its attention to Valencia Street’s well-traveled bike lanes.

Early this morning, members of the group SF Transformation (SFMTrA) put up flexible white posts and cones along the northbound side of Valencia from 17th to 14th streets, creating barriers between cars and the bike lane.

According to an email from the group, that area of Valencia was chosen “because it is notorious for private cars, Ubers and delivery trucks double parking/unloading in the bike lane.

“Parents biking their kids to school have to swerve into moving traffic,” the email said.

SF Transformation also noted that the area has a number of curb bulb outs and parklets and said the San Francisco Metropolitan Transportation Agency could make protected bike lanes next to them because cars don’t need to pass through them to park.

“The street could also use some badly needed Uber/taxi/truck loading/unloading zones,” the email said.

Founded this year, the group put up other “installations,” including at Folsom and 13th streets, the bike lane on the “Wiggle” at Scott and Fell and in Golden Gate Park. Last week, Hoodline reported that the SFMTA had removed posts on Crossover Drive in Golden Gate Park, and at Geary and Leavenworth streets.

It’s unclear how the city agency is reacting to SF Transformation’s newest effort. As of this afternoon, a spokesman for the SFMTA hadn’t responded to a request for comment.

However long they stay up, the barriers on Valencia Street are bound to garner significant applause. According to a bike counter near 17th and Valencia, nearly 300,000 bicyclists have traveled that stretch since the meter’s installation in May.