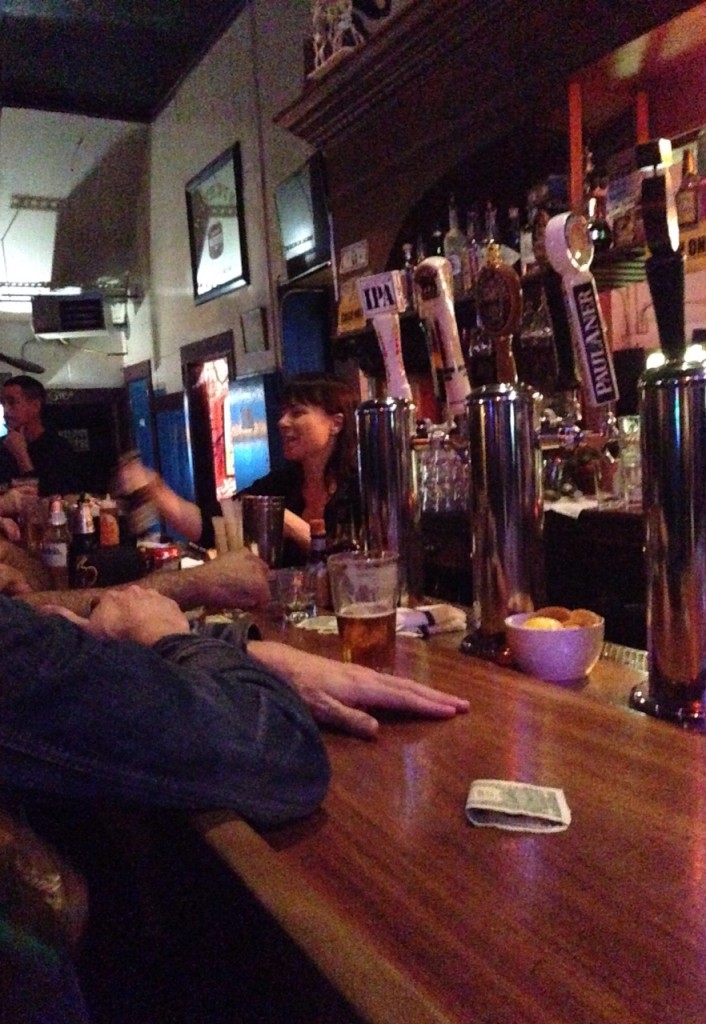 Celebrating thirty years is an impressive feat for any business, and practically miraculous these days in San Francisco.

But Capp Street’s Uptown will do just that later this month with three nights of festivities highlighting bar regulars and employees past and present. The dive bar favorite will have more than just history to celebrate. Last month, Uptown’s employees announced they are buying the bar following the sudden death of owner Scott Ellsworth.

Here’s a rundown of the events, which take place Dec. 26 through 28 and are open to the public – provided you’re 21 or older: 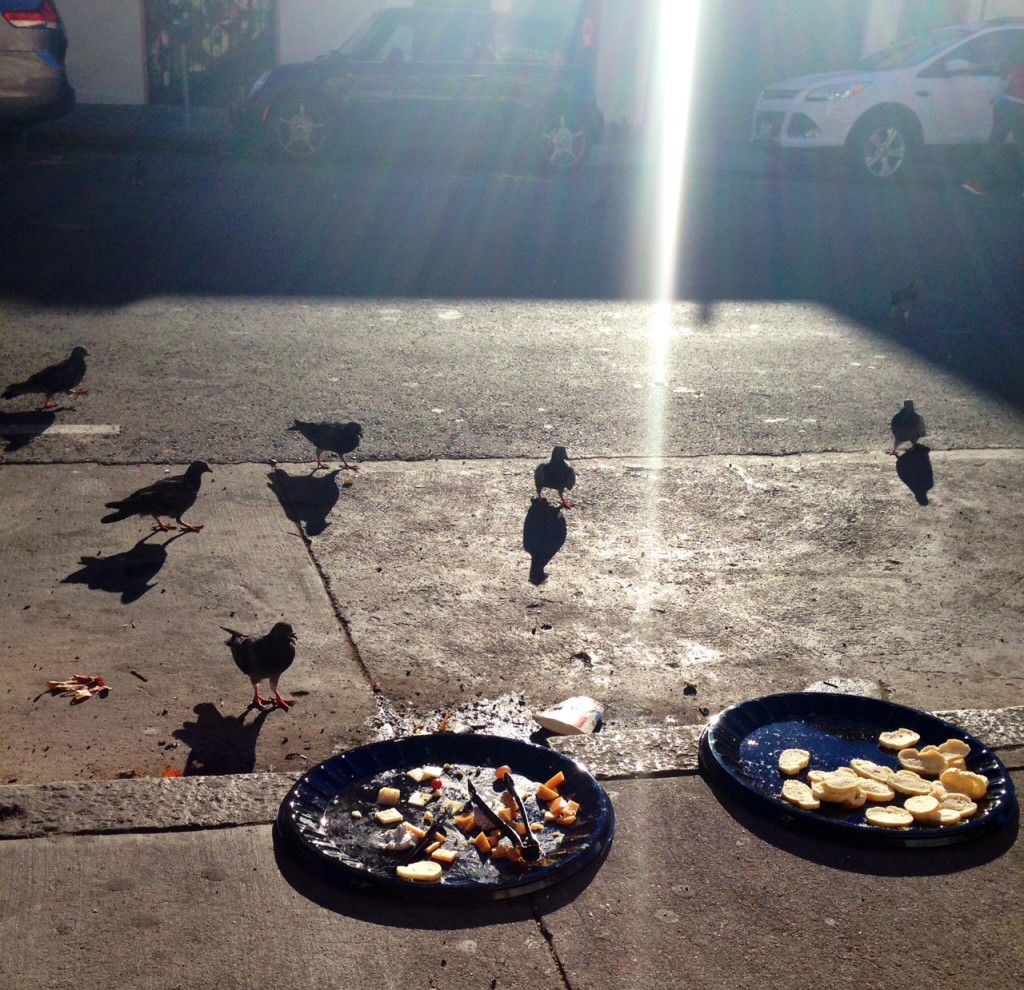 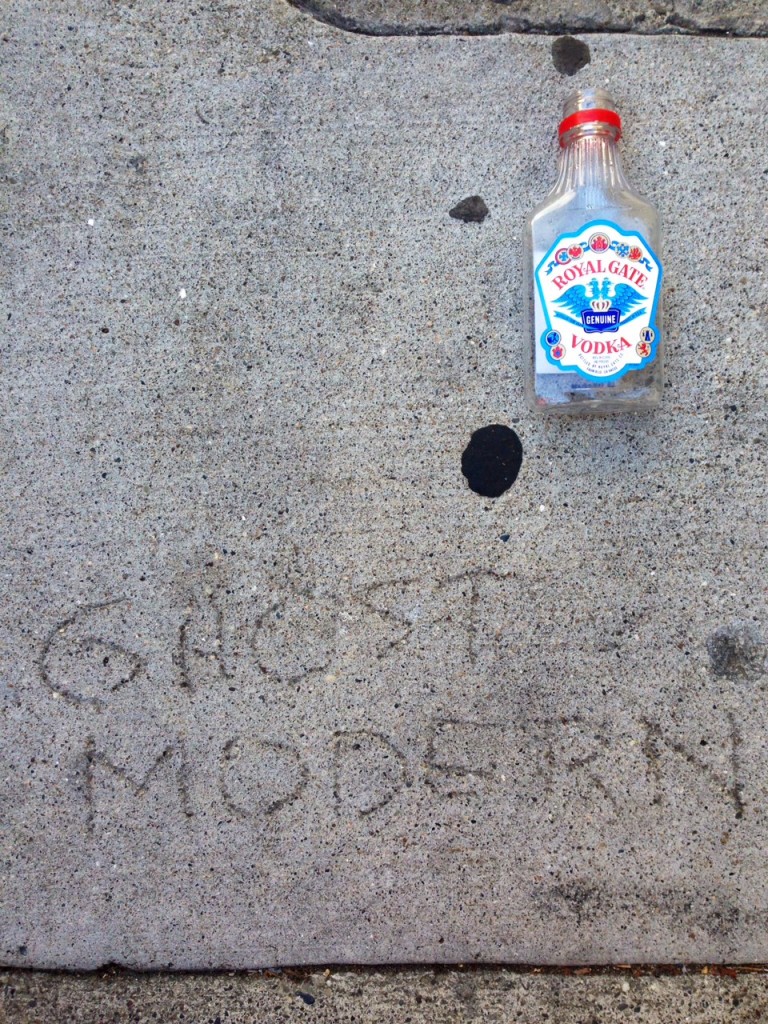 You see the cast-offs so often in the Mission, on the sidewalks, gutters or hiding in bushes, that you might start to believe the whole neighborhood was drinking it. But don’t let those empty grab-and-go bottles of Royal Gate Vodka fool you. The dirt-cheap vodka has a very rich San Francisco history. Royal Gate’s owner Haas Brothers dates back to the Gold Rush and has been marketing, importing and selling spirits in San Francisco ever since, a number of them award winning. Royal Gate has been produced for Haas Brothers since the 1950s, named around a boardroom table, an homage to San Francisco and the Golden Gate.

What can you tell me about the history of this brand?

The Haas family is the 17th company in California history, founded in 1851. They helped to develop Wells Fargo bank, ran Levi Strauss for 150 years, lots of different enterprises. Cyrus Noble Bourbon, which the family launched in 1871 in San Francisco, continued in the pursuit of distilled spirits. A sea change in the spirits world in the United States in the 20th century affected Haas Brothers which was a move toward white goods, as we call them in the industry, and away a little bit from brown goods.

What do you mean by white goods?

The industry classifies or categorizes brown goods as being scotches and whiskeys and such and white goods as being vodkas, gins, tequilas and rums. There was a famous party in San Francisco with Rudolph Nureyev, the ballet artist, in the 50s and the Haas family being at that time socialites and involved with high society threw (it) and went out to New York and found 11 cases of this obscure Stolichnaya vodka and brought them to San Francisco for this big party. The party was such a big hit and it was the first time that many of the attendees had ever tried vodka. They were interested or excited by the flavor and the transparent color and so the family started off in the vodka direction, that is to say the white goods direction, having already achieved a legacy in brown goods. And then (Haas) developed Royal Gate vodka as a domestic, lower-cost alternative to what was then a very problematic, difficult situation of maintaining supplies of Stolichnaya, especially during the Khrushchev era and the Cold War.

Its slogan early on was ‘Puts the Ahhh in Vodkahhh,’ correct?

Yeah, that’s right. And actually when you talk to the old school, the legacy generation in our liquor business, it’s funny for us to imagine but one of the exciting things that people thought about vodka in its emergence in the 1950s, was that it didn’t leave a noticeable smell of alcohol on your breath. So they liked the fact that it was clean and that ‘ahhh,’ ‘Puts the Ahhh in Vodkahhh’ was part of that idea that essentially, compared to brown goods, it was tasteless, odorless, clean and refreshing.

So even when it started Royal Gate was a budget brand?

The historical context is important. The Seagram Company really ran the liquor business in post WWII America. The whole emphasis on spirits was affordability. It’s hard to ever imagine that brands would now advertise getting the most bang for your buck so to speak, but when you look back at Seagram ads and the competing bourbon, there was a huge premium put on, ‘it’s only, you know, $2 and it’s as good a quality as the $20 brand.’ Now the industry favors ultra, ultra-premium and it’s really expensive. The genesis of Royal Gate was to be great quality at an affordable price. It wasn’t initially available in small sizes. Small sizes weren’t really yet popularized and it was a brand sold in the classic size, as they used to call it, a fifth. In that era they were a fifth of a gallon. That was the Royal Gate size. At its peak, it was selling a quarter million cases a year, in Northern California, Northern Nevada and Oregon.

Like a lot of those regional domestic vodkas around the country, it’s from a larger distillery in the Midwest and then sent to local regions for what we call in the industry “rectification,” adjustment to proof and filtration and regional bottling. So our local bottler is a company called Frank-Lin. And Frank-Lin will bottle many, many different products for many different companies. Skinnygirl Margarita, I saw was there, SKYY Vodka.

How does it rank among the other brands that you sell? Is it the most popular?

In volume, yes, it’s the most popular.

Can you say anything about how much you sell of it, where you sell the most?

I should not say how much we sell but I can say we sell many tens of thousands of cases per year. San Francisco is definitely the biggest market.

Is it mostly to corner stores?

At this point it is (split) into two businesses: The small-sized business and the larger-sized business. Larger sizes often go to restaurants and bars. A house pour selection is what they call that. We do a lot of chain business on the larger sizes. And then of course, smaller sizes are the domain of liquor stores.

So even if I’ve never gone out and bought a bottle of Royal Gate, I’ve probably still had it because it may be the house pour?

Somewhere in the many hundreds to maybe the small thousands of bars and restaurants use it as a well item.

So is it fair to say there are a hundred bars in San Francisco that use it?

Hundreds, actually. A lot of times, it’s the go to.

You’ve mentioned “premiumizing” the brand. Does that mean Royal Gate will be higher end?

Yes, but we’re going to stay a value brand. We’re not going to take it to regular or premium.

But for me, the 10 thousand-foot view of the story as I see it, having worked for Haas brothers for 17 years, is it’s an old brand with working class roots and a working class market. There was quite a long time when there was more premium on value and affordability and pragmatism. Royal Gate was created for that market and I think the only reason that now we see it prospering in communities like the Tenderloin is it has remained a very price achievable working-class brand. The economically not so well-to-do, that population, still continues to drink Royal Gate robustly. It’s not only the the disenfranchised minority communities in the Tenderloin; it’s working class logger communities in Mendocino and Humboldt County. It’s also the disenfranchised fisher communities along the Oregon coast and up and down the California coast. It’s not just that inner city, urban minority drinker; it also happens to be Central Valley dairy workers and Delta and bay and Northern California fishermen.

What’s the difference between vodka that’s inexpensive and expensive?

That’s a fantastic question. The truth is very little to no difference. The government formula for what can be called vodka is a standardized formula because of the wheat content. There’s a standard production recipe. And all of these vodkas are column stilled, column distilled. So in that way there’s no difference between Royal Gate and something like Grey Goose vodka. They’re made similarly.

Now, that’s the essential fact and reality. There are different tax implications for, in the world of vodka, how you formulate your vodka. And if you add to your vodka flavor modifiers, you actually save money on federal taxes, a 2.5-percent savings on federal excise tax. And so, Royal Gate does what other value vodkas do which is to add citric acid, which is used for for lemon zest or lemon derived citrus note. And if you are an ultra-premium vodka you wouldn’t add that.

Is that the major factor that keeps it inexpensive?

It seems like such a nominal amount, 2.5 percent federal tax on a liter bottle. For a liter bottle it’s literally seven cents of tax difference. But when you multiply that over a quarter million cases it becomes somewhat significant.

When I talked about “premiumizing” it, that’s what we’ll be removing. It’s what comes out without that citric note, a breadier, yeastier, a little bit more creamy flavored vodka and less of a kind of citric astringency.

There are some people in the Mission who drink Royal Gate and others who have this affection for the brand for whatever reason. Local blog Mission Mission wrote that part of the Mission should be rechristened “Royal Gate.” What do you think about that?

I don’t really know how to answer that. My personal and also the values of the family, which I can say because I worked for them for almost two decades, is there are many more worthwhile icons in San Francisco local history to christen or rechristen a neighborhood for other than an alcohol brand. (Laughs). That’s the first thought. But in the spirit of Royal Gate, it is a quintessentially San Francisco brand. It’s from one of the city’s very oldest families. It’s never been absent from the marketplace in over 60 years in San Francisco so I guess I would say I’m charmed to hear that there’s popular support for it, popular vocal support for it.

A light at the intersection of 16th and Capp streets 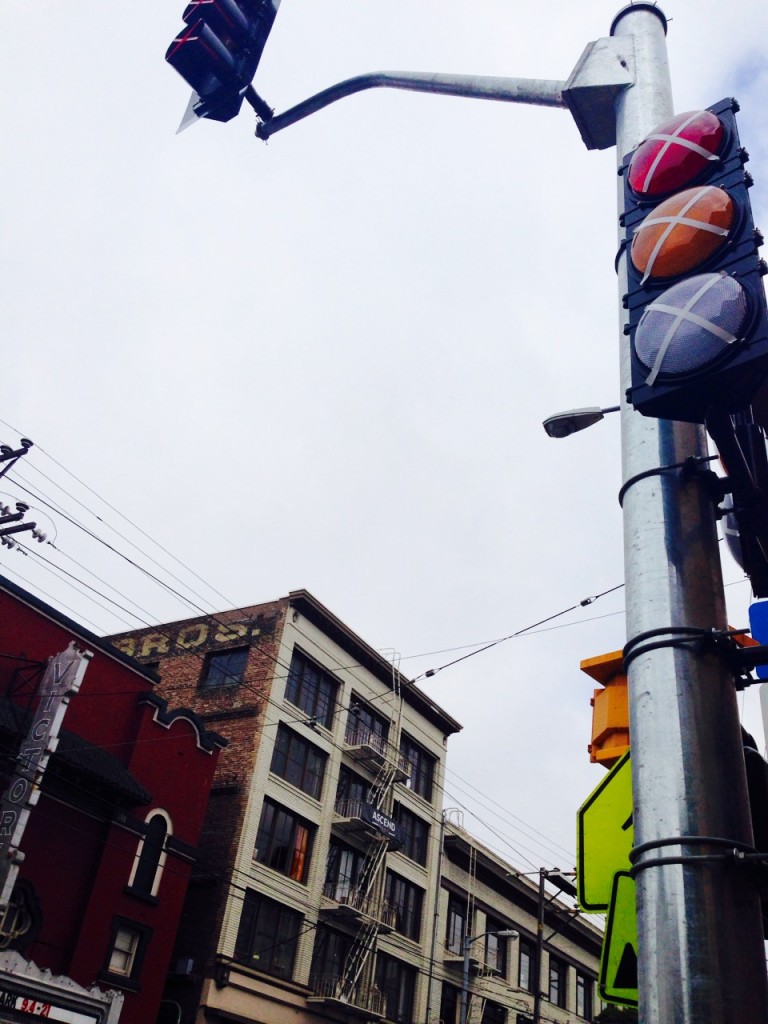 If you consider crossing 16th Street at Capp a test of bravery, this should come as good news.

The city has begun installing a traffic light at the intersection, one of 24 Vision Zero projects aimed at eliminating all traffic deaths in San Francisco by 2024. San Francisco Municipal Transportation Agency spokeswoman Kristen Holland said the intersection is on what the agency calls its “High Injury Network,” a small fraction of streets that account for 60 percent of the city’s fatal and serious pedestrian injuries.

Between 2007 and 2011, there have been at least six accidents involving pedestrians at 16th and Capp streets, according to figures provided by the SFMTA.

No word yet on when the signal will go live.

Editor’s note: Some friends and I were headed to an Oscar party back in May when we saw a woman sitting in the street near that intersection yelling that she’d just just been hit by a car. Paramedics were there. Fortunately, it looked as though she hadn’t been seriously injured.

Dance your buns off! 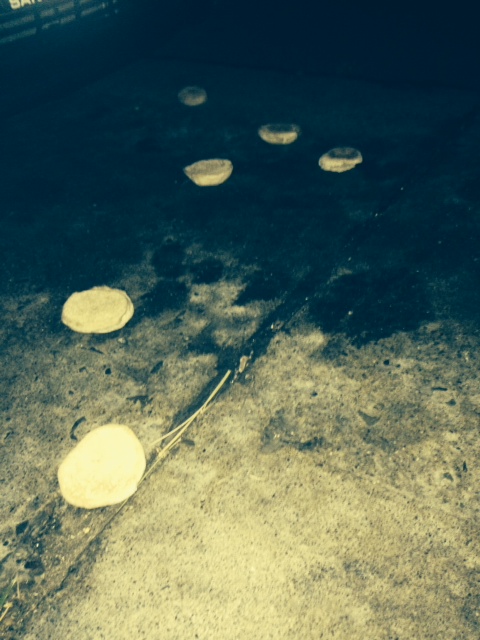 Hamburger buns partying it up on Capp Street.